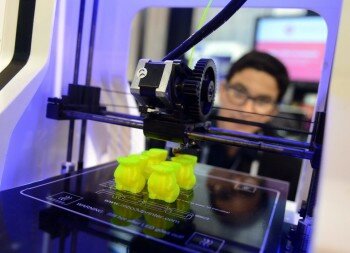 With 3D printing technology rapidly advancing, many are wondering when 3D printers will find their place inside the common household.

When it comes to food, 3D food printers have already made their debut commercially in restaurants and bakeries, adding a new dimension to cake toppers, and creating candy, noodles, dinosaur-shaped spinach bites, and other various edible goods.

Even at this early stage, experts say that the demand for 3-D printers is rising. According to CNN, market research firm Gartner says that shipments of 3-D printers are expected to grow 75% in 2014. Garner estimates that the consumer 3-D printing market will hit $133 million this year. Though, this is still far less than the $536 million companies will spend on the product.

But 3D industry experts remain optimistic that the 3D printer will one day become a mainstay inside everyday homes.

This year’s annual Consumer Electronics Show featured a 3-D printing section that was larger and busier than it had been in previous years. There was also an increased emphasis on consumer-friendly products.

It’s thought that once 3D printers become a more familiar item, more people will want the devices. As with any new technology, there is always some apprehension when it comes to trying it out. Still, once they become more familiar, 3D printers and 3D food printers are expected to fly off the shelves.

3D printed sugar cubes and spinach dinosaur bites aside, most people simply don’t have a compelling need to rush out and buy a 3D printer. Hobbyists and enthusiasts are jumping onto the bandwagon, but they represent a niche market that holds nothing to the mass potential that reaching a mass consumer base would hold.

Analysts say that the introduction of easier-to-use technology and, of course, a relevant and compelling reason for consumers to purchase a 3D printer, will be the major game-changers in the market, and will drive consumers towards purchasing 3D printers.

Right now, it seems to be about creating an irresistible application of the process that will make 3D printing exciting -or somewhat necessary- for consumers. Discovering what people really want is perhaps the next step towards mass-marketing 3D printing to consumers.

“Simply experiencing the technology and conceiving ways to use it will mainly drive makers and hobbyists, not the average consumer, to purchase a 3D printer to begin with,” said Pete Basiliere, research director at Gartner.

“However, we expect that a compelling consumer application — something that can only be created at home on a 3D printer — will hit the scene by 2016.”