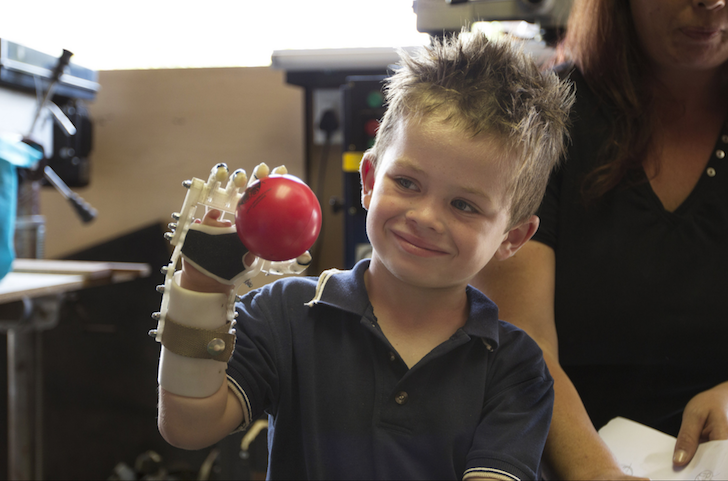 A few months ago we covered the story of a little boy named Liam getting a new hand. Liam was born with Amniotic Band Syndrome (ABS), a condition that can result in missing extremities out of the womb. In his case, he has no fingers on his right hand. It wasn’t until he was fitted for a Robohand that he could grasp a ball with the hand, and now others are enjoying the same.

Robohand came out of a collaboration between Richard Van As and Ivan Owen. Richard lost four of his fingers in an unfortunate workshop accident and was unsatisfied with the expensive prosthetic options. He therefore took on the task of restoring his hand by his own means. After building prototypes by hand for a while, he stumbled on a video of Ivan demonstrating his mechanical hand. Richard contacted him and Ivan gladly joined the project. With Richard in South Africa and Ivan in Washington State, their work was slow. But then Makerbot kindly donated a Replicator 2 to each of them, and their progress accelerated greatly.

The 3D printers made the fact that they were on different continents seem negligible. One of them could design a part, send it over the internet to the other, and then they could both hold the same part after it was printed. That pace of prototyping was just not possible before personal 3D printers, and the separation of oceans is nothing for the bounds of the internet. When the two are combined, the world gets marvels like Robohand. Richard and Ivan were not motivated by money in their pursuits, so Robohand is completely open source and available on Thingiverse.

The plans being fully accessible has allowed others to use Robohand, as it’s only about $150 to build, and most of that cost is for the thermoplastic used for the gauntlet. It’s possible to print that part as well, but it’d be easier with a 3D scanner. Richard has paid out of pocket to help fit children with Robohands, but he’s not made of money. Accordingly, he’s set up an indiegogo campaign to get more children catching balls (yes, a ball can be caught with it) with 3D printed hands. If you want to support the project you can do so here. The children will appreciate it.