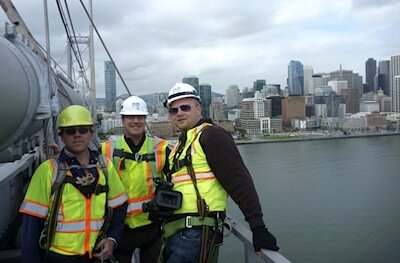 People always ask me what the real world applications of 3D printing are. I go through the list of just about every industry that is now making use of 3D printing. And then I add, beyond the obvious applications, there are uses in every day life that you never think about, until the time you think to yourself, “Hey, I can do that with a 3D printer!”

Here’s such a story. It’s not a big or super-exciting story. But what it represents is: the ability of 3D printing to solve everyday problems.

Gian Pablo, writing for the Makerbot blog last week, told a story of how he used 3D scanning (with a camera only) and 3D printing to enable him and his crew to test out something they needed to do on the Bay Bridge in San Francisco. Pablo was strategizing on how to physically attach lights to the suspension cable of the bridge, for the Bay Lights Project. He couldn’t just cut out a section of the cable to bring back to his work area where he could work on designing the attachment. So instead, he realized he could create his own exact replica of a section of the bridge by scanning it and 3D printing it.

He and his team went to the bridge and found a section of cable to duplicate. He didn’t have a 3D scanner, but he did have a camera with which he snaps photos of the cable from all sides. Then, he used the program called 123D Catch, from Autodesk, to turn those photographs into a 3D model. After that, it was just a matter of cleanin up the capture with Netfabb Studio Basic, removing various artifacts to end up with just the cable section.

After the 3D model was ready, they sent the file to their Makerbot 3D printer to 3D print a beautiful, detailed chuck of “cable” they could easily work with, away from the bridge, and without having to remove anything from the bridge. Watch the short video below to see how easy it all was.

There’s no end to the uses of 3D printing.