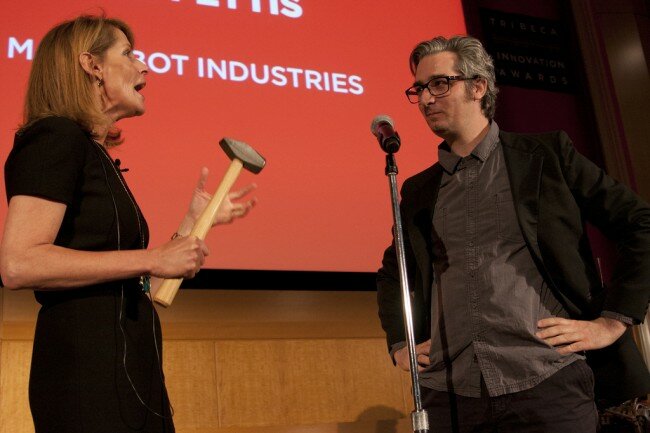 Congratulations go out to MakerBot CEO Bre Pettis, who yesterday received a Disruptive Innovation Award from the Tribeca Film Festival. Tribeca’s site has the following words for the Makerbot trailblazer:

“With “The Replicator,” a desktop 3D printer that can make objects about the size of a loaf of bread, Bre Pettis has created an entire ecosystem for desktop 3D printing, a cutting-edge consumer brand, and a flourishing open source design community on Thingiverse.com. MakerBot offers a simpler, more affordable, 3D desktop printer, giving consumers access to 3D printing for under $2,000.”

Makerbot blogger Andrew posted a few words of his own this morning, giving props to the Makerbot community:

“What is an ecosystem without all the flora and fauna? The people who own our 3D printers, or interact with the world of personal fabrication in other ways – by spending weekends in hackerspaces or uploading design ideas to Thingiverse or commenting on others’ ideas and creations – are the people who breathe life into this ecosystem. So our hat’s off to you.”

Oh, by the way, there are some other interesting honorees who also received the award. Take a close look and you’ll see another name you know, but perhaps not a name you would have expected: Justin Bieber.

For more information, go to Makerbot.com.