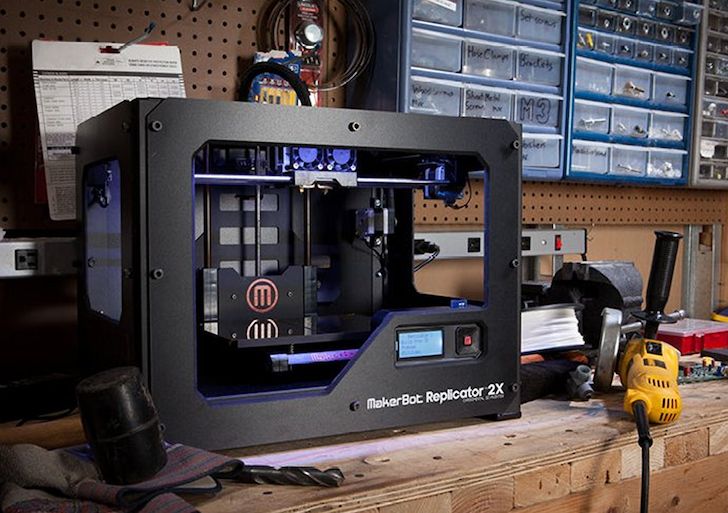 “You’ve got many miles of 3D printing under your belt, measured in filament. You’ve built a 3D printer. You’ve probably built a trebuchet. A big one. The MakerBot Replicator 2X Experimental 3D Printer is for brave explorers with the patience to deal with ABS plastic and dual extrusion.” – from the Markerbot.com sales page.

As expected, Makerbot today is unveiling the new Replicator 2X Experimental 3D printer at the Consumer Electronic Show (CES) in Las Vegas. The new printer looks to be a souped up version of the recently released fourth generation Replicator 2.

Let’s hand over the introduction to Bre Pettis, CEO of MakerBot:

The Replicator 2X Experimental is touted as being designed for 3D printing experts working in R&D. It features experimental dual extrusion and uses the familiar petroleum-based thermoplastic MakerBot ABS Filament.

The new release of MakerBot MakerWare will also make generating dual extrusion models easier than ever. A new drag and drop feature allows different models to be dropped onto the virtual build plate and viewed in the colors that you plan to print them.

So why is it called “Experimental?” First off, in my opinion, I’m not sure that’s a very good name, as far as marketing goes. It makes me think that the product itself is experimental, that will possibly work, and it possibly won’t — after all, it’s not a “final” product, just experimental. But, what I think it really means is that the (advanced) user is going to experiment with the printer. At least that’s what I’m getting from this quote from their press release: “if you have the courage and patience to face the inconsistencies of ABS and the difficulty of dual extrusion, if you’re willing to walk to the edge of what’s possible and push it farther, if you’ve taken apart a flamethrower and put together a trebuchet, then the MakerBot Replicator 2X Experimental 3D Printer is for you.” Got the courage?

The new MakerBot Replicator 2X Experimental 3D Printer is priced at $2,799 and will begin shipping in mid-March. It is available for sale beginning January 11, 2013, at www.makerbot.com/store.

Just as we published this, Makerbot came out with a blog post with more information. I’m sure Bre won’t mind me pasting in some of the highlights they posted about the new printer:

Colors
The most obvious, and by far the simplest, use of dual extruders is to enable two color printing. Although a single-color object could be painted, there are times when painting a particular object would require a great deal skill or be very time consuming. While printing a plastic sushi set for my daughter I used dualstrusion to add black plastic “soy sauce” to white plastic dishes. Sometimes, painting an object might even be impossible. Imagine an object such as a bottle, vase, or an egg where you want to have an image or design inside. While it might be impossible to paint inside such an object, the interior image could be printed inside the object as it is being created.

Dissolvable Support
Dual extruders allow for printing with a dissolvable support material like PVA. Being able to print with a water soluable material means your robot could print entire mechanical devices complete with moving pieces.

Varying Densities
With two extruders it would be possible to create an entirely solid plastic object with a customization density. This could be used to make trick dice, a balancing toy, a toy that can’t be knocked down, a toy that can’t be stood up, or maybe a boat that is difficult to sink.

Mechanical Properties
Different extruded materials, such as ABS and PLA plastics, tend to have different physical and mechanical properties. ABS tends to be more flexible and PLA tends to be more rigid. A 3D printer with dualstrusion can combine the two plastics into a single object that is both flexible and rigid.

Simultaneous Dual Printing
One of the more exciting developments with dual extruder printing was a recent contribution by Thingiverse user thorstadg. Thorstadg created a method for operating both extruders simultaneously – allowing the printer to two objects, one with each extruder, at the same time.

Variable Resolution
Two extruders means you have two nozzles at your disposal. However, there is no particular reason for both extruders to have the same size nozzle aperture. With one very fine nozzle aperture and one relatively large nozzle aperture, a single object could be printed with quick printing course features and very high resolution features that take more time.