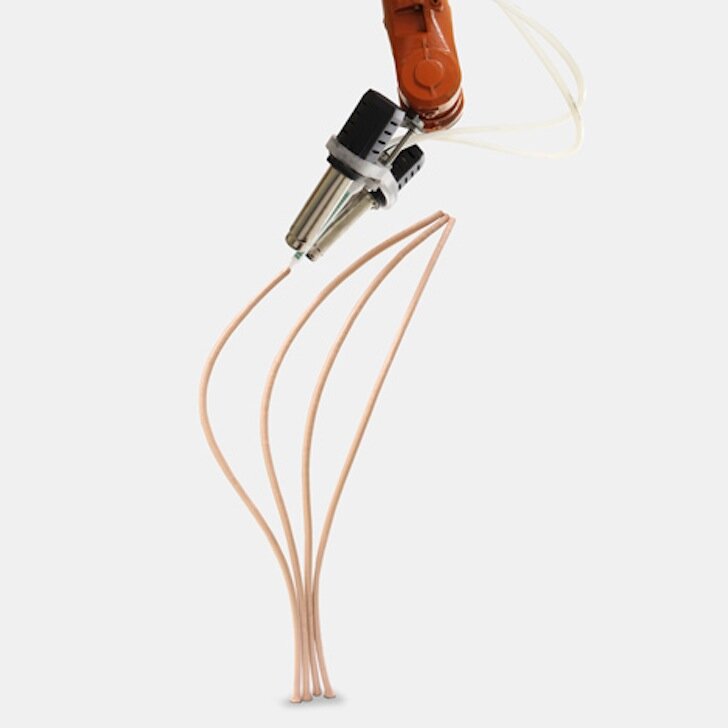 This is almost too cool, too beautiful for words. It’s not 3D printing in the traditional sense, but if we can call the handheld extruder (the 3Doodler) a 3D printer, then we’ll call this 3D printing as well.

Reminding me of a cross between the 3Doodler and Dirk Vander Kooij’s wild, robotic 3D furniture printer, the Mataerial 3D printer uses a robotic arm to “draw” 3D shapes in the air. Imagine the 3Doodler, but instead of your shaky hand doing the drawing, a robotic arm gracefully and steadily does the work.

Normal 3D printers lay down a layer, move up the Z axis and lay down another layer, over and over until the object is printed. The Mataerial instead prints in open space, with no support structures required, with a technique the designers have patented and are calling “anti-gravity object modeling.” Basically, the extruded plastic hardens as quickly as it comes out of the nozzle, creating “rods” of plastic in the form of hanging curves.

As one of Mataerial’s designers explained, “One of the key innovations of anti-gravity object modelling is the use of thermosetting polymers instead of thermoplastics that are used in existing 3D printers.”

The speed at which you see the printer going in the embedded video is not the actual speed; it’s been sped up three times. The speed of a print is dependent upon the thickness of the material. At the thickness you see in the video, Mataerial will print a meter of length in about three minutes.

Mataerial is the result of the collaborative research between Petr Novikov, Saša Jokić from the Institute for Advanced Architecture of Catalonia (IAAC) and Joris Laarman Studio.