Full-color 3D printing is difficult to achieve as current technologies impose many limits, especially with regard to resolution. One of the most capable full-color 3D printer lines is the 3D Systems ZCorp ZPrinter series. So when the Staples marketing people oddly announced that select Staples stores would use the Mcor IRIS for the pilot full-color 3D printing service called Easy 3D, it made sense. Though it’s a subtractive process, the IRIS uses paper as its print material. Specifically, A4 sized paper, which Staples has plenty of. 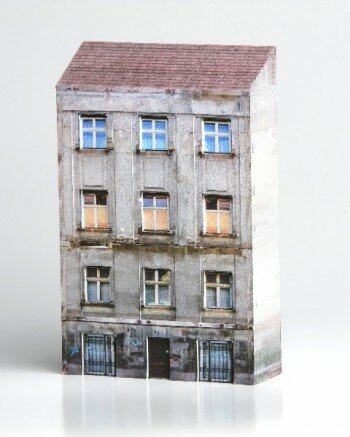 The IRIS works though some process like the following: a sheet of paper is laid down, an adhesive ink is sprayed in the silhouette of a cross section of the 3D object, and the outer rim of that ink is photorealistic color; a carbide blade cuts the silhouette out and the process is repeated. The output is a solid chunk of paper that must be pulled and picked apart with an X-Acto knife. It’s a delicate process. I’m not sure if moving parts are possible, and objects with deep cavities could be a task in post processing. Still, what it can do looks impressive. The ink is non-toxic and paper is cheap and recyclable, so the process is affordable and eco-friendly.

And what it can do just got better. Mcor recently released ColourIT to complement the SliceIT application; ColourIT applies 1 million+ colors to objects before they’re sliced. The new software is compatible with standard file types — STL, WRL, OBJ, 3DS, FBX, DAE, and PLY. The IRIS is quite affordable to own and operate, as leasing is just around $16,000 per year for the Free D plan, and that includes unlimited consumables. It can be purchased outright for about $48,000. The most affordable color ZPrinter costs about half that but it offers only 64 colors. I don’t know how much the high end ZPrinters cost, which means it’s a lot. If an additive process is important to you, then the IRIS probably won’t be your choice of 3D printer. But if you really want all the colors of the rainbow, there’s the IRIS.