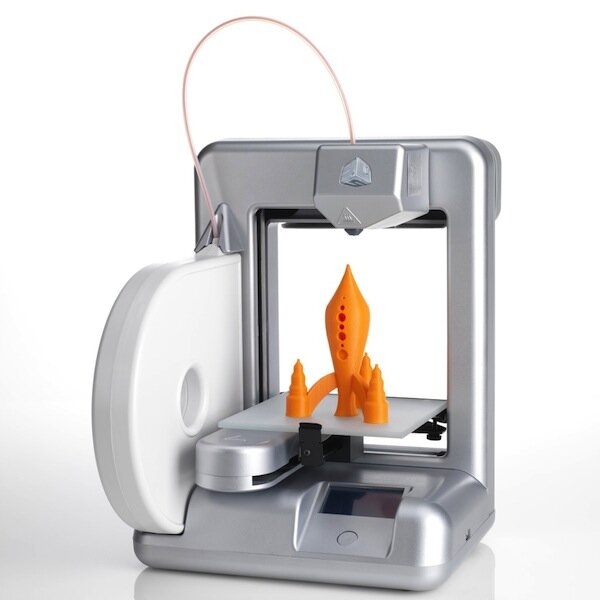 Two months ago Make magazine awarded their “Easiest to Use” award the Cube 3D printer by 3D Systems. That was a good choice. Even though you can get more 3D printer power and resolution from a number of other printers at a lower cost, there is no other printer as home-friendly or novice-friendly as the Cube.

And now 3D Systems has given the Cube an upgrade and released the second generation of the home printer. While it looks about the same, something one could place on the kitchen counter alongside the toaster, there’s added power under the hood. It now boasts 2X better accuracy, while printing at a speed 1.5X faster than its predecessor.

One of the new features is a glass plate that can hold a 3D printed object without heating up, keeping the kids and your home safer. In fact, it’s the only 3D printer that is officially certified for home use with IEC regulations, Another important new feature is it can now print in ABS or PLA plastic without having to make any adjustments; the Cube will auto-detect what material is being used. And, there are going to be more plastic filament colors available as well, increasing from 10 to sixteen, including glow-in-the-dark blue and green.

The software is getting an upgrade as well. You’ll be able to switch between solid, hollow and half-filled structures, so you can waste less plastic and better control the object strength.

The Cube sells for $1299 or you can purchase a special print pack that comes with 4 cartridges, 25 files and cubify invent for $1399. They are taking orders now for shipping beginning on January 21.

Coming up shortly in another article on 3Dprinter.net…the simultaneously announced CubeX, BIG brother to the Cube. Stay tuned…