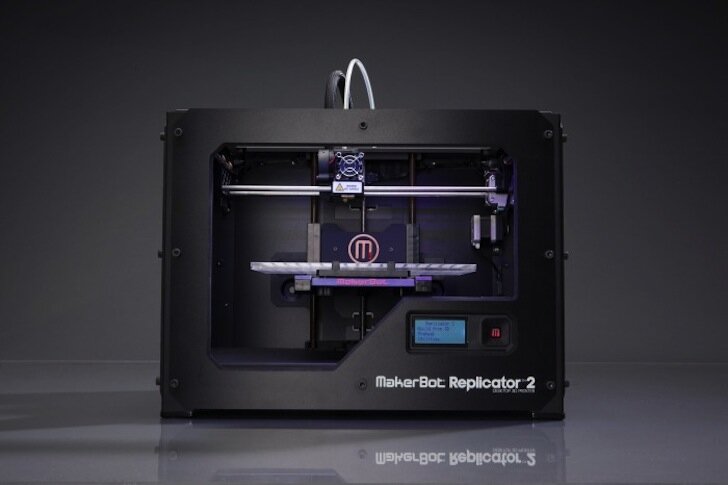 Makerbot had an announcement today, and it was a doozie. Between their new 3D printer, their new 3D modeling software and their first retail store (yes, you read that right!), they have sent a signal to their competitors that they mean business.

The Replicator now has a successor, and it’s called the Makerbot Replicator 2. And it’s a beauty. It looks nothing like the old Replicator, which looks like it was built in your garage (Bre, I say that affectionately). This baby is sleek and sexy. But it’s not only a stylish new model. It’s got the specs to keep you interested after it turns your head.

I’ll just let Makerbot CEO Bre Pettis start this show off in his own words.

Now that’s a big step up from the old Makerbot. From the Replicator’s 250 microns to 100 microns now! Here’s a summary of what’s new, from the announcement on their blog post:

The fully-assembled Replicator 2 comes in at a $200 higher price tag than than its predecessor, at $2,199. In January 2013, the company will introduce an “experimental” two-color-capable, higher-end Replicator 2X for $2,799.

Watching the net for initial reactions, I found this comment over at RPES Blog worth repeating:

Couple of notable points, the Makerbot only processes one material — PLA. But not just any old PLA, it is optimised specifically for the Replicator 2 and Bre referred to over and over as “Makerbot PLA filament.” This is a brave move – a few people weren’t impressed, but the reasoning behind it can’t be faulted — it’s biodegradable and it also reduces energy consumption by 32% compared with the 1st gen Makerbot 3D printer. Also, the build volume for the Replicator 2 sees a 37% increase over it’s ancestor. This is good going and one of the consistent demands from users. That was never going to be a bad move. 410 cubic square inches in all, which converts to 12″x6″x6″ (xyz).

There were a couple other noteworthy items in the announcement. One is that Makerbot also introduced is a complete software update that goes by the name of MakerWare, and it brings faster and more consistent printing. And it’s no longer open source. They’ll be a lot of boos and hisses over this, but I’m not in that camp–this is a serious business and you just can’t give away all your secrets.

Makerbot says the new slicing engine is up to 20 times faster than the previous technology. The software appears to be quite intuitive. Here’s a screenshot of the new software, technically in beta. Read more about it at the link. 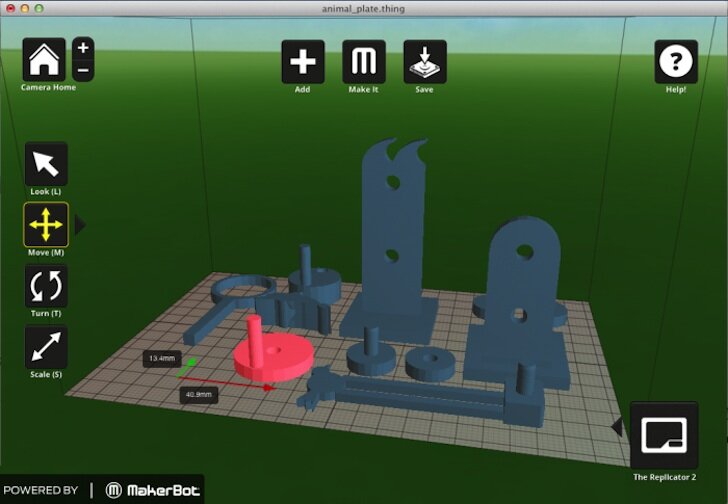 The other noteworthy announcement aside from Makerbot Replicator 2, is that they are also announced their first retail storefront, which opened today at 298 Mulberry Street in the Manhattan neighborhood called NoHo. Watch out Apple!

I’ll leave you with a look at the Replicator 2 in action:

It seems that Makerbot has thrown down the gauntlet, prepared to move beyond the hobbyist and into the business of 3D printing.

Mark is the founder of 3DPrinter.net. He encourages anyone reading this to submit their own article for publication. Connect with him on his Google+ account. View all posts by Mark Fleming »
« 3D-printed San Francisco Skyline watches on Kickstarter
MIT spin-off Formlabs set to announce “revolutionary” 3D printer »