One of traditional manufacturing’s greatest limitations is size. Not big; that’s easy. You just have to look at a skyscraper to see that. But small, that’s another story. Subtractive manufacturing requires tools; tools to grind, mill, and drill. But mechanical tools don’t work well on objects smaller than the tools’ contact points — a drill can’t put a hole in an object that’s smaller than the drill bit. With 3D printing, though, the lower bounds of size open up, as solid workbench tools aren’t necessary. Instead, the toolbox is filled with things like lasers. Printing at the molecular level with lasers is old news, and now photonics are under the microscopic spotlight at Nanoscribe.

Look at that tiny spaceship! The detail! That Hellcat is the diameter of a human hair and that video is in real time — it took 50 seconds to print, whereas it once took hours. 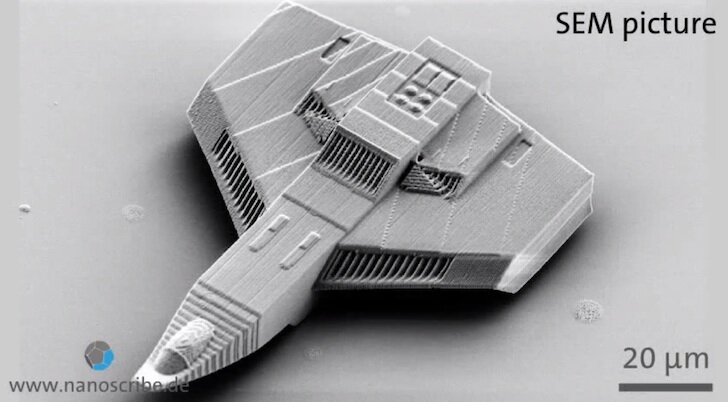 The new Photonic Professional GT uses laser lithography, but the technology is based on “two-photon polymerization” with a galvo mirror system. This combination allows for unmatched precision, but also blazing speeds. Martin Hermatschweiler, CEO of Nanoscribe, had this to say about the printer, “We are revolutionizing 3D printing on the micrometer scale: The demands for precision and speed at the same time are met by industrially established galvo scanners – a quantum leap in nanofabrication. Our product benefits from more than one decade of experience in photonics, the key technology of the 21st century.” That’s with just a decade of experience in photonics; imagine what another decade will mean: five second prints? The patented Dip-in Laser Lithography has the ability to print on a platform as large as a square centimeter, outputting objects as tall as 100 microns. Huge, I know. So big that a scanning electron microscope is necessary just to view it.

There’s no way to list all the industries this could benefit, but a few are: microprocessors, biopharmaceuticals, optics, nanorobotics, and lab-grown meat. Hermatschweiler went on, “Our 3D printers were already unrivaled in precision and resolution, user-friendliness, and compactness. Now they also stand out due to their enormous speed.” It’s strange to think of anything on the micro scale being user-friendly, but it is 2013, so it might as well be super fast too.