For the most part the size of an object that’s 3D printed can’t be larger than the build volume of the printer; the only exceptions are printers that can print onto existing objects, so a printed object could be repositioned in a way that allows the printer to continue printing onto it. For this reason, size constraints are a limiting factor with the entire industry of 3D printing. The common sense solution for bigger parts is to build bigger printers, and some have gone that route, but common sense will take us only so far. When Neil Gershenfeld, director of MIT’s Center for Bits and Atoms, addresses the problem of going bigger, his wisdom says go small. 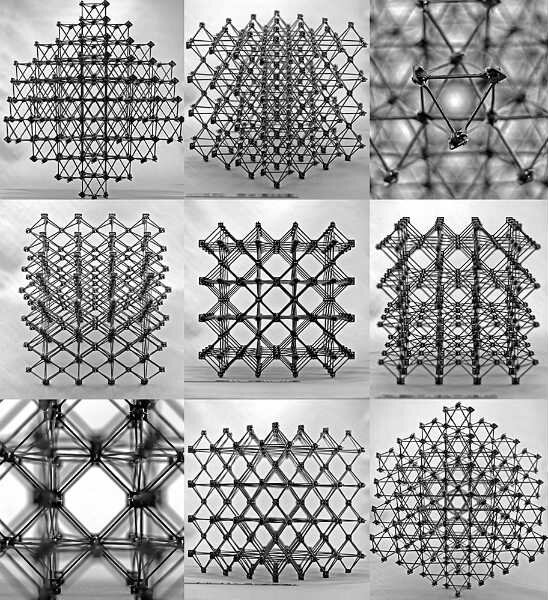 By 3D printing lots of small pieces that can be combined, Gershenfeld and Kenneth Cheung built a composite material that’s up to 10 times stiffer than existing ultralight materials. The structure is made up of cross-shaped pieces into “a cubic lattice of octahedral cells, a structure called a “cuboct” — which is similar to the crystal structure of the mineral perovskite.” Because it’s assembled, it can be disassembled. That means it can be repaired or rearranged. Gershenfeld and Cheung are working to develop robots that can traverse the structures and assemble them.

The technology combines fiber composites, porous materials, and 3D printing to answer the question of “Can you 3D print an airplane?” Conventional materials generally break at joints, and when they fail they often fail completely all at once. With the cuboct, forces are distributed across the lattice structure. It’s a highly redundant design that fails incrementally, if it fails at all. Though solid and supportive of weight, it’s also elastic. It can be flexible too, bending in its entirety instead of just at specific points.

This isn’t the first time that 3D printed pieces have been combined to form stronger materials either. “Evolutionary optimization” was used with 3D printed shapes to test jamming, a process where the bonds between combined materials become stronger as more force is applied. The tests were successful. Additionally, researchers at Princeton wrote a program that cuts objects into smaller parts that can be printed on printers with specified build volumes. The program is called Chopper and it formulates the partitions according to “assemblability, having few components, unobtrusiveness of the seams, and structural soundness.”

Such methods will lead to decreased weight of automobiles and airplanes. It’s possible that even cranes and other construction equipment could be built using 3D printed composites. This would make them lighter and easier to transport. These technologies use significantly less material too, so more can be built with less.