The more we move forward technologically, the more we realize just how brilliant nature is. The efficient biological systems that have evolved over time are proving time and again to be useful blueprints for man and his quest to create more efficient materials, structures and systems.

The geniuses over at MIT — who, incidentally, invented the first practical 3D printer — understand how looking to nature can inspire industrial design. There’s a group at MIT called the Mediated Matter Group that is researching “how digital fabrication technologies mediate between matter and environment to radically transform the design and construction of objects, buildings and systems.”

Mediated Matter Group has produced a video to explain their objective. It’s short and worth a listen. In it, MIT Media Lab researchers Steven Keating and Neri Oxman demonstrate and discuss some of their work in 3-D printing. Oxman describes 3D printing and their group’s mission:

“it is a manufacturing technology which allows one to generate complex three-dimensional forms by laying down successive layers of material, one on top of the other. Our goal here at the Mediated Matter Group is to explore processes for digital fabrication, like 3-D printing, that are inspired by nature with the belief that we are going to emerge on the other side generating and making things that are more efficient and more effective.”

Keating shows off their robotic arm 3D printer, on which they attach different extruder heads to test out different material combinations and designs. In the video, the arm has a Makerbot extruder head on it, which prints ABS plastic, and he demonstrates some 3D printing. With different heads they can print with anything you can make from powders: ceramics, metals, plastics. 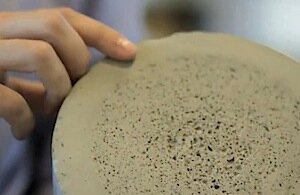 One of the materials they can print with is concrete. Concrete? What would you print with that? Keating says, a house. His aim is to someday print an entire structure, the whole building. But not only can a 3D printer print concrete, it can create concrete structures even better than traditional methods can. By using print heads that can control the density of the concrete, a 3D printer can mimick the ways nature creates efficiently creates strength in its designs.

For example, think about palm trees for a moment. They are very tall and yet quite skinny for their height, able to withstand hurricane force winds. Nature’s secret is the varying density of the tree trunk — it is denser on the outside and gradually becomes less dense towards the center. Other structures in nature such as bones also exhibit the same varying density.

3D printers that can vary density as they print have a perfect application in creating concrete columns and other support elements. The result is a lighter-weight and stronger structural element. As Keating says, “Nature always uses graded materials, a hard, dense outer shell, and an interior of spongy material. It gives you a high strength-to-weight ratio. You don’t see that in man-made materials.” Not until 3D printers get up to speed, that is.

Oxman sums up their mission beautifully: “So in the end, we are really interested in bringing together the industrial and the natural world to create 3-D printing platforms that are biologically inspired. And for us that means 3-D printing materials that variant properties over space, and also over time.”