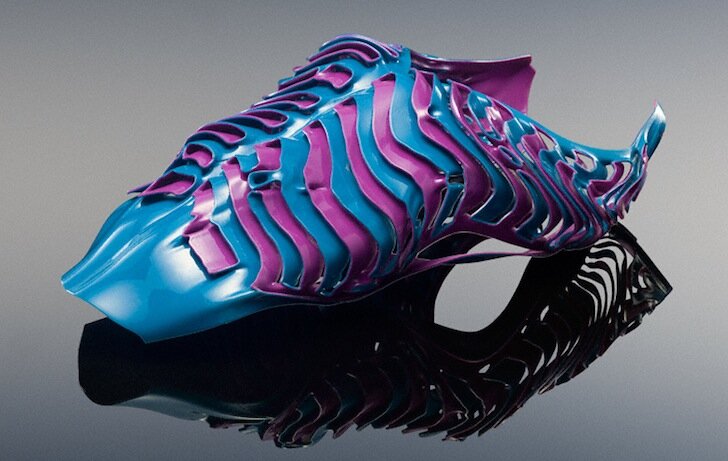 “I’m excited about the possibility of dreaming, and the possibility that one might really turn into physical material form any poetry that resides in the mind.” – Neri Oxman.

We last heard from Neri Oxman in our story, MIT’s Mediated Matter Group Uses 3D Printing to Mimick Nature to Create Efficient Structures. Ms. Oxman, Professor of Media, Arts and Sciences at the MIT Media Lab, has the distinction of being one of the “top 20 most influential architects to shape our future.”

Recently, 3D printer maker Objet, interviewed her about how 3D printing is changing the world of art and design. Eighteen pieces of her 3D printed work was shown at an exhibition that just opened in the Pompidou Center in Paris yesterday: ‘Multiversités Créatives’ Oxman’s ‘Imaginary Beings – Mythologies of the Not Yet.’ The collection was sponsored by Objet and created in close collaboration with W. Craig Carter (Department of Materials Science and Engineering, MIT) and Joe Hicklin (The Mathworks).

My name is Neri Oxman And I’m an architect. I came to MIT after I completed my studies at the Architectural Association in London and have worked for a few years in the industry in architectural firms. I came here to do my PhD and stayed as a faculty member. I direct the Mediated Matter group at the MIT lab. And the Mediated Matter group is essentially focused around digital fabrication technologies that are inspired by nature. Basically in nature everything grows right? We generate human tissues and animal tissues and even plants as substrates that are formed and infused with environmental forced. And then they grow to create their various functions. In architecture and design we tend to work with elements that are put together to create a function. In the natural world those larger functions are the results of both. This is also what brought me to 3D printing to begin with if we can generate tools or technologies that grow materials rather than subtract materials, then we can control lots of elements in that growth process. We can control material composition and by controlling material composition we can compute various functions into the same materials.

I knew I was working with an additive manufacturing technology. So I knew I was working to begin with, with layers. With structures that would be designed and fabricated by consecutively layering basically very, very thin layers one on top of the other. So that got me thinking about the relation ship of those layers. How can we include other information inside those layers? Can we vary between material properties as a function of what kind of scales? Are we only looking into delineation of particular features of the model? Are we looking to vary the material product as we would vary the pores of and on our skin?

I think 3D printing has really brought about a revolution and design that is equivalent, perhaps to the printing press revolution. To Gutenberg revolution of movable type in the 1440’s. If you think about it the moveable type evolution really allowed everyone, all of us to print books and to mechanize this process of democratizing information to anyone. And without a doubt the 3D revolution is democratizing and revolutionizing the way we do fabrication. So, if in the mid 15th century we could all read and write, now we can all make. And so the type of democratization of information that was enabled through the moveable type and Gutenberg revolution, is now being enabled by the 3D printing revolution. And I think it’s a big revolution that the 3D printing technology was extremely important for dreaming up this project. It wasn’t about generating a form of those imaginary beings and then using the 3D printer to print them. It was really about using the multi material technology as an opportunity to think about how to make those contraptions or wearable myths, mythical and how to actually make them work as better products or better objects for the human body.

So this show that we’re opening in Paris on May 2nd is called Imaginary Beings. Mythologies of the not yet. And I should say that this work is really the fruits of a wonderful and long collaboration with dear, dear friends of mine and dear colleagues of mine. Of course friends at Objet and Connex. Specifically people who have been working with the Connex 500. Which through a period of, yeah, a good five years we’ve been working together and have been going through the various material developments and testing and implementation of some of these technologies in the design work that I’ve done. So this is from the technology size. But I should really mention two great collaborators on this project. The first is my good friend and colleague professor Craig Carter from the Department of Material Science and Engineering. And another partner in this particular project was Joe Hicklin from The MathWorks. We had lots of ideas for where we wanted to go with the show and some of these ideas meant that we needed to develop technological tools and the types of features that I wanted to capture in these new designs. But these new features were not yet part of the technology. So part of the excitement around the show for me was really the opportunity to work with Objet hand in hand on these new features and to actually make them happen. To see them in physical form and to see them manifested in physical objects, which we’ll see in the show. But really the combination between material science, computer science and biology yielded this show, this project which now thinking about it, and now I’m sort of reaching the end of producing and putting all of the pieces together.

I really and truly believe that this is really just the beginning of this project and these models are the proof that the dream can actually be made possible. So, all of these principals in science, I wanted to find their analogies in mythology and sort of use this as my fantasy playground to explore some of these ideas. And so the exhibit contains 18 objects. Eighteen wearable mythologies for the human body. So essentially they are myths that you can wear and that talk to the kind of amplification the kind of super human powers that you gain by wearing those.

Some of those are more practical than others. Of course some of them remain at the realm of fantasy. One such example for instance is a series of helmets that’s called the Minotaur series. And so the Minotaur series was really an exploration into the design of a shock absorbent helmet that could adjust itself to the form of the skull that it inhabits, or which it inhabits. The Minotaur series explores how we can generate helmets which are responsive and dynamic using soft and stiff material that can correspond with the kind of shock that, god forbid, that you have to absorb. So this was one such example.

The corset was inspired by Arachnids myth. And essentially we were looking to design a spiderweb like structure that would be filled with certain soft materials in the in-fill regions between the spiderweb. So imagine an elastic spiderweb filled with soft and stiff materials. Stiff where you want the spiderweb to be static and not to move to not have compliance. And soft materials where you want to have more elasticity, higher levels of compliance depending on the kind of movement.

And Joe Hicklin, Craig Carter and I, were looking into reaction diffusion patterns. And implementing some of those reactions diffusion patterns in using multi material printing. So these reaction diffusion patterns which are abundant in nature. They explain all sorts of principals in nature and actually they’re a great touring model for various computational processing as well, is what inspired the form of the corset. And basically moving from inner softer materials to more external stiffer materials that vary in property and also vary in the kind of density in wrinkles, the size of the wrinkles, etc.

So 3D printing is kind of those new frontier in digital fabrication. but when you think about it, these technologies, certain technologies that help us or make our life better or more efficient in some way, they come and go every five or ten years. Technologies that actually make a difference, that actually generate a paradigm shift, they don’t come that often. And I believe that 3D printing is one of those technologies that has created this paradigm shift. They say that when you’re inside the paradigm shift, you can’t see this shift. So I think we’re inside that sort of kind of tunnel, that kind of hurricanes. And so we’re not seeing it, but I think, again, like Gutenberg’s revolution, 2012 is the new 1440s. And I think it is a revolution that is perhaps a destructive technology more than anything else because it really changes the way that we think about production, about consumer products. And about democratizing processes of design and making. That is not to say that I truly and utterly believe in democratizing all of design, but it definitely affords everyone, all of us, with these possibilities.

So I definitely encourage people to look into that and to explore that as a method of thinking about making more than simply a service station. Make it a way of thinking about the world and making, fabricating your vision. I don’t think that this kind of work would have been brought to fruition without the MIT lab and of course without Objet and their support with the multi material printers. So, I’m very, very thankful for the opportunity to be in this nexus. I’m extremely, extremely excited to attend the opening. And excited about the prospect of showing the work that my colleagues and I have been working on for so many, many months. Mostly I’m excited about the possibility of dreaming and the possibility that one might actually turn into physical material form any poetry that resides in mind.