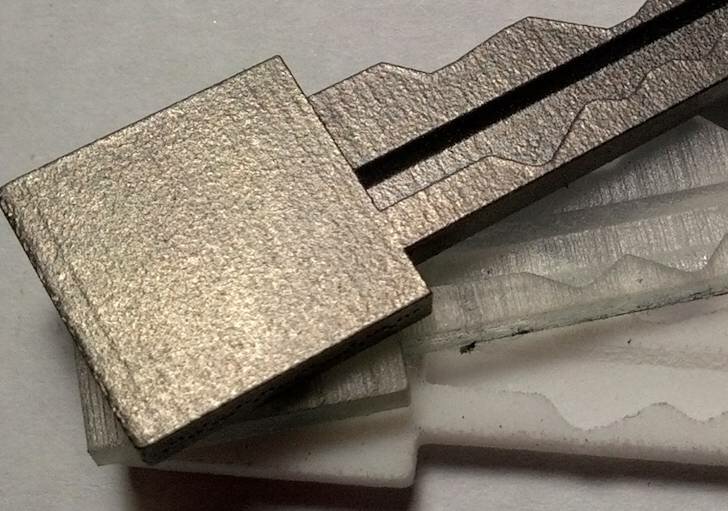 Every year a hacking event is held in Las Vegas called DEF CON. What started as a going away party for a friend has become the premier event for software and hardware hackers, phone phreakers, and security professionals. Even government officials from the FBI and DoD attend. There are competitions and talks that provide valuable information to those in the fields of digital information, security, and monitoring. One development released at DEF CON 21 was the 3D printing of high-security keys. 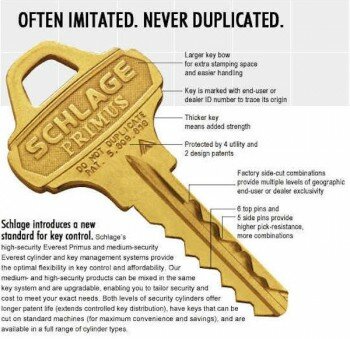 Schlage touting how its Primus key is difficult to duplicate.

It’s not clear who “do not duplicate” stamps are intended to protect, but they don’t deter everyone. More people are deterred by either their own moral conscience to not seek entrance to places they don’t have the right to be in or by the technology itself. It doesn’t take much equipment to make keys, but it’s still equipment that most people don’t have. The Schlage Primus key, however, is a bit more specialized. Instead of just the traditional teeth that most keys have, the Primus key has another set on the side that both makes the lock harder to pick and the key nearly impossible to duplicate.

I say nearly impossible because MIT students David Lawrence and Eric Van Albert duplicated a Primus key using 3D printing. They created a piece of software that takes input from a flatbed scanner and generates a 3D printable copy. The files were sent to Shapeways and i.materialise, where they were printed in plastic and titanium. Normally customers have to go to Schlage if they want another copy, but technology has forged another path.

The method that Lawrence and Van Albert developed is for copying a key in your possession, so it’s not intended for criminal activity. However, it has been demonstrated that keys can be copied by only having pictures taken of them from a distance. “All you need is a friend that works there, or to take a picture of their key, or even a picture of the key hanging off their belt. Pirating keys is becoming like pirating movies. Someone still has to get the information in the first place, but then everyone can get a copy,” says Lawrence.

Because they chose to copy a high-security key, the success serves as proof of concept that virtually all mechanical keys can be copied in a similar manner. Accordingly, they feel locks should become more digital. “If we show that mechanical locks are vulnerable to key duplication just by having a handful of numbers you can download off the internet, hopefully they‘ll be phased out more quickly,” says Van Albert.

When i.materialise found out how their service had been used, they released this message admonishing the act. “We were disappointed to see that our services were used by the students to make an unauthorized copy of a Schlage Primus key in titanium. i.materialise rejects any use of its services to promote activities or to create products which pose a safety or security risk to others… Further, i.materialise’s policy is to not print any design that infringes a third party’s intellectual property rights.” The first part I get; as a company they can choose what they don’t want to print, and looking out for the safety of others is admirable. The part about intellectual property is also respectable, and i.materialise would be in court every day if they didn’t honor copyright and patent law. But it’s important to note that patent protection on the Primus key ended in 2007. After all, Lawrence and Van Albert used the patents themselves to create their software.

Intellectual property has become heavily discussed since the dawn of the Age of Information, and the Third Industrial Revolution presents even more issues. But let’s not hamper education and innovation protecting companies over patents that are in public domain.