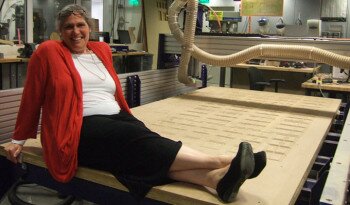 Sherry Lassiter has worked with Neil Gershenfeld, Director of the MIT Center for Bits and Atoms and creator of the Fab Lab concept for many years, and so she has a wide range of cool, entertaining, educational, and powerful stories about the extraordinary work being done throughout the world in FabLabs.  A Fab Lab is a Digital Fabrication laboratory that is open source and open access allowing, as Dr. Gershenfeld puts it, “anyone to make ‘almost’ anything”.   Ms. Lassiter is also the Director of Fab Foundation, which supports the over 250 Fab Labs currently in existence, and gives guidance to the new Fab Labs that are coming on line at a rapid pace.

Ms. Lassiter’s keynote at the recent US Fab Lab Network 2014 Symposium brought together the technical with the social impact that technologies such as laser cutting and 3D Printing are having on communities.  She also updated research going on at MIT, and announced a new grant from Chevron to create Fab Labs.  It was a presentation full of technical details, but that filled the soul, as well as the mind, with wonder and delight!

Perhaps the group that stood out in Ms. Lassiter’s talk was Fab Lab Barcelona.  The Spanish Fab Lab is hosting the 2014 annual international Fab Lab meeting Fab10 in July and the group has taken Fab Lab activity to the entire city.   Started by Vincente Guallart, an architect who had co-founded the Institute for Advanced Architecture Catalonia and is now the city’s Chief Architect, Fab Lab Barcelona’s work centers around transforming PiTo to DiDo in cities.  Ms. Lassiter explains, “when we move from ‘Products In – Trash Out’ to ‘Digital Fabrication In – Digital Data Out’ Mr. Guallart sees a way to combine new distributed models that ensure sustainability of our cities.”

There are now 4 Fab Labs in Barcelona and government has plans for 11 of the centers near specific markets.  For example, Green Fab is being put into an old monastary to study traditional fabrication methods and then combine them with ecologically sound principles using Fab Lab digital 21st century tools.  Fab Lab Barcelona was also instrumental in buidling the Solar House pictured above, a collaboration between a number of Fab Labs in the Network, that won Solar Decathalon Europe’s Peoples Choice Award.  It is an interesting parametric model as the design is optimized for where in the world you are constructing the dwelling.  It’s also pretty cool looking!

Fab Foundation was recently awarded a $10 million grant from Chevron to open 10 FabLabs in the United States.  The first two will be in California, with opening planned later in 2014, and Fab Foundation is guiding the process of bringing the new Fab Labs to life.  Chevron is also working with Fab Foundation on a number of challenges and the groups will be bringing a fun and innovative STEM-Zone to the USA Science Festival April 26 & 27 in Washington, D.C.

MIT Research
In both 3D Printing and all other types of Digital Fabrication we’ve been reading about the work on machines actually building machines.  The Center for Bits and Atoms [CBA]  is leading this next generation research with a project “Machines That Make” and are also deconstructing machines into modules of capabilities to pull together elements for machines that are specific to application needs.  This is the ultimate in product customization.

Digital materials for automated assembly are also at the core of CBA research and work is being done on these new materials on the nano scale as well.  The Center is creating new flexible yet strong composite materials for use in airplane design where communication and control is built right into the materials.  One can imagine the reduction in weight, cost, and labor these new materials bring to manufacturing.

US FabLab Network Ignite Presentations
A wide range of intriguing projects were presented by Network member Fab Labs in short Ignite presentations, and the amount of 3D Printing, laser cutting, and other technologies being used in industry and education through the Fab Labs was astonishing.  One of the unique presentations was from Matthew Wade at the Patrick Henry Community College Fab Lab.  Housed in downtown Martinsville, VA instead of on campus, the FabLab hopes to foster economic development in a region that has higher than average unemployment.  Mr. Wade integrates the Innovation Engineering Management System (IEMS) that was developed by the US Department of Commerce’s NIST- Manufacturing Extension Partnership System into the Fab Lab work.  While digital fabrication tools such as 3D Printers can spaun creative ideas, it is imperative for manufacturers, makers, educators, and inventors to have a systematic way to keep innovation thriving.

I was sorry that I couldn’t stay for the full conference, but the first day alone filled the participants with hope and promise for the future of our global community, Earth, through the extraordinary power of the Fab Lab network!