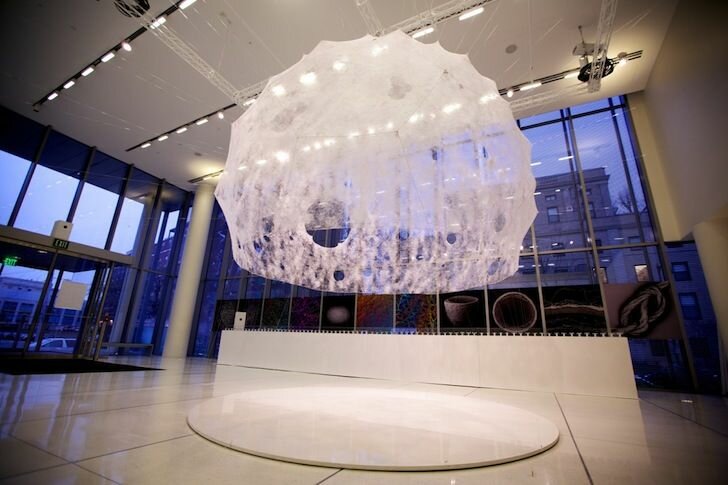 The Mediated Matter group at MIT researches “how digital fabrication technologies mediate between matter and environment to radically transform the design and construction of objects, buildings and systems.” In other words, they study the constructs and processes of nature, and try to apply its that brilliance to how we humans create things.

Neri Oxman, the founder and director of Mediated Matter Group, has a new initiative called the Silk Pavilion, which s best explained in their words:

The primary structure was created of 26 polygonal panels made of silk threads laid down by a CNC (Computer-Numerically Controlled) machine. Inspired by the silkworm’s ability to generate a 3D cocoon out of a single multi-property silk thread (1km in length), the overall geometry of the pavilion was created using an algorithm that assigns a single continuous thread across patches providing various degrees of density.

Overall density variation was informed by the silkworm itself deployed as a biological “printer” in the creation of a secondary structure. A swarm of 6,500 silkworms was positioned at the bottom rim of the scaffold spinning flat non-woven silk patches as they locally reinforced the gaps across CNC-deposited silk fibers.

You’re probably still a bit confused, as was I, but once you watch the video you’ll understand what’s going on. This is not so much what you’d expect to see in a blog about 3D printing, but I decided to publish it because not only is Oxman one of the top thought leaders in 3D printing, but the video is simply breathtaking to watch. So enjoy.