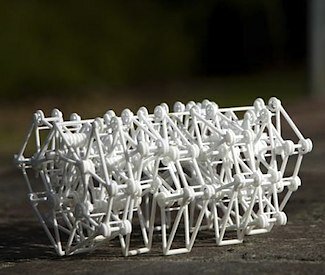 I was reading Forbes this week and there was a good interview of Shapeways.com founder Peter Weijmarshausen. In the article, Mass Production for the Masses: Shapeways CEO Peter Weijmarshausen on the Rise of Personal Manufacturing, he spoke with Fortune’s Adam Ludwig of their Techonomy section.

Ludwig asked him an interesting question: “What’s the most complex object you’ve ever printed? He knew the answer right off the bat. It’s something called the Animaris Geneticus Parvus, by kinetic sculptor and artist Theo Jansen. Weijmarshausen explained:

“The Animaris Geneticus Parvus has 70 moving parts. It’s printed in one single process, not in multiple processes with the assembly of moving parts. With 3D printing, you can make mechanically articulated moving parts. Of course, I didn’t think of this when we started Shapeways. This is already ten times better than our first objects. That’s what happens when you open up tech to everyone.”

Cool. That told me how complex it was, but I still had no idea of what that crazy sounding object was. A video that went along with the story explained the very odd thing that was printed. It’s called a Strandbeest, and you need to watch an introductory video of just what that is before you watch the video of the actual 3D printed object. To prepare you for it, here is the creator of this “new life form,” Theo Jansen, discussing his life’s work back in 2007 at a TED Talk. Caution: you may be blown away by this.


Here’s one more video you might want to watch before viewing the video of his 3D print at Shapeways. It’s from a BBC feature on Jansen, with another one of his “animals,” the “Animaris Siamesis.”

Now that you have an understanding of what the heck these things are, you are ready to watch the video of his baby at Shapeways, the first ever 3D printed Stranbeest:

With thinkers like this, along with the exponential acceleration of 3D printing, biotechnology, nanotechnology, genomics, robotics and computing power, it boggles the mind to think about what the heck we’ll be creating in the years ahead.

If you would like to purchase one of these guys, Theo Jansen has a shop on Shapeways.com and they are only about a hundred bucks.