Until recently, stereolithography (SL) printers have been limited to the professional realm. Of course, hobbyists get to everything first, so a few people had personal SL printers. A couple of those people decided to commercialize their printers. One of those printers is the beautiful Form 1 from Formlabs, which uses a laser to cure a photopolymer resin one layer at a time. There’s also the B9Creator, an open source, DIY SL printer that uses a DLP projector to cure a similar resin one layer at a time. More recently, Dean Piper hosted a successful indiegogo campaign that (unintentionally) combines the linear laser operation of the Form 1 with the open-source DIY nature of the B9; his printer is called mUVe 1.

mUVe 1 is the manifestation of Dean’s efforts to make high-quality 3D printing more accessible. On his campaign page he states, “I never intend to close the source design or the source files on this project, it will always be open for all to use and change. I will share the entirety of the source as soon as I have finalized the design and have received all the materials for the first run of kits, and start shipping. The people putting themselves out there as I am deserve an early start. I intend to share all my projects freely moving forward as well. I believe in open source ideas and this is my way at starting to give back to that community.” The hardware configuration is also designed to be easily modified and upgraded; the frame is the modular MicroRax and the electronics are the same that RepRaps use. All parts besides the reservoir cost less than $20, and they’re all easily sourced. Dean has been getting great results with SubG resin from MakerJuice, which cures more quickly than B9 resin (so it prints faster), and it’s cheaper too.

Dean’s design sounds pretty good, delivering < 0.1mm layers in a build volume of 145mm x 145mm x 185mm. The laser is adjustable too, meaning higher resolutions are achievable. His kits ranged from $999 to $1,699, which is significantly more affordable than the competition. As people print more out of their B9s, and after others get their Form 1s and mUVe 1s, SL printers will start taking some of the personal 3D printer market share away from FDM printers, though plenty of makers will prefer to have both technologies. Dean has other plans for more SL printers, so I’m glad his mUVe 1 campaign was successful. [caption id="attachment_7421" align="aligncenter" width="553"] 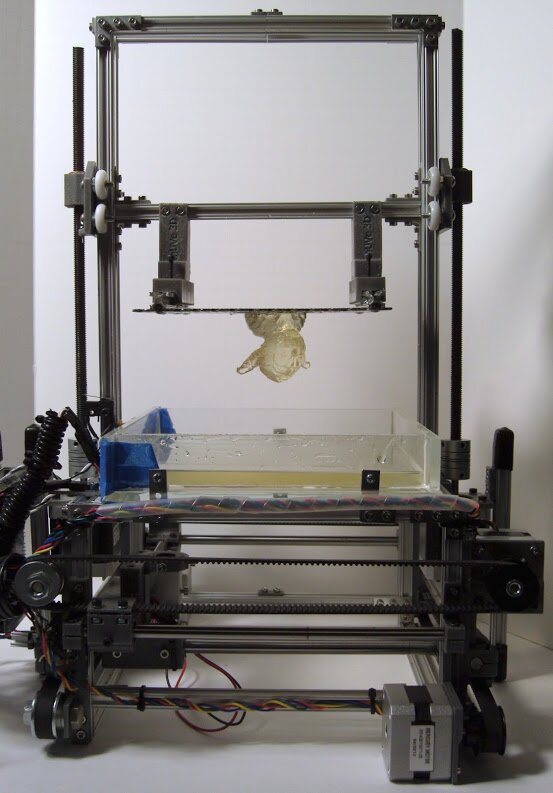