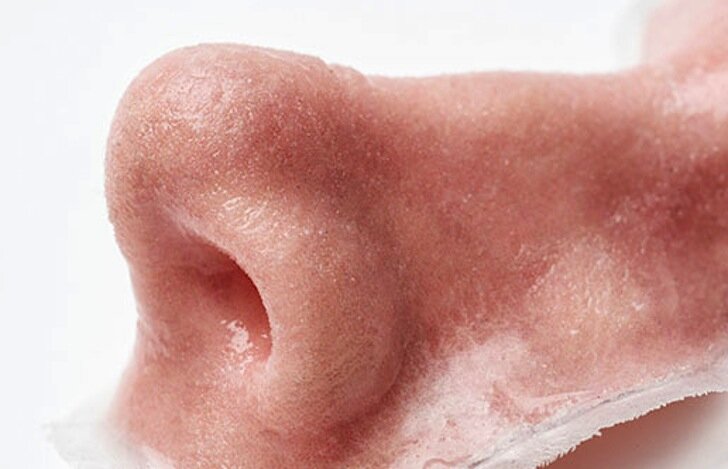 The nose is a peculiar organ. It helps with determining if the cornbread is done or if the baby needs changing, and it totally confuses us with pheromones. You’ve got to cock your head to kiss around it and there aren’t many nasal recreational activities that aren’t illegal. The body does not require the nose to live as it regulates no necessary bodily functions. But people are more than bodies of functions equipped only with what is required to live. Much more. At least a little more. We wear personas like hats and our faces speak without words. When we talk to one another we often shift our gaze between the eyes and the lips, and with the nose occupying the space in the middle, its absence or deformation can be quite unsettling and distracting. Those unfortunate enough to have lost their noses face social and psychological hurdles because of this, so they understandably seek prosthetics to feel more “normal.” Typical nose prosthesis fittings are timely and very uncomfortable due to plaster needing to be pressed directly into exposed nasal cavities to acquire an accurate casting, and the new nose only lasts a few months so fittings must be done somewhat regularly. Such a process sounds barbaric after hearing what 3D printing has done for one anonymous nose loser.

She’s not a loser. She lost her nose to nasal cancer in 2002, so when Fripp Design and Research called her as their first client for a fitting, she expected to spend her day with plaster being crammed into her nose spot. Instead she was pleasantly surprised to simply have her picture taken by a set of 3D cameras that captured 180 degrees of her face without once touching her; the image was then manipulated in CAD software to create a negative of the topography of her face, specifically the nose area, which achieves what a plaster casting session does without all the invasiveness. A nose was modeled in a skin tone a few shades lighter than hers and printed with a topography shaped to fit perfectly against her face. The tone was lighter because when the nose is curred with silicone fluid to make it more flexible it gets a bit darker; the process also creates a super-thin, feathered trim around the prosthesis, because of silicone draining away, which is rather useful for blending with skin and making it look more natural. This 3D printed nose is much lighter than her previous noses and the best part is that all the information is digitally saved, so she can have another printed any time without need of another fitting.

The team at Fripp Design and Research has plans to acquire a 3D scanner to further streamline the process, but it’s already light years ahead of the conventional method. I feel that ears could likely be imitated as well, and probably lips too. Biocompatible materials are obviously already being used, but when actual biomaterials are used, we’ll see new applications in reconstructive and cosmetic surgery. In the meantime, don’t take your human horn for granted.