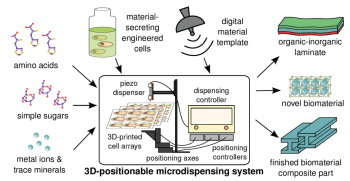 NASA-funded researchers are working towards successfully bioprinting specially engineered cells, which will be able to produce different materials, such as wood, bone, and enamel.

The team’s leader, Lynn Rothchild, is an evolutionary biologist who works for NASA and teaches astrobiology at Stanford. Together with Diana Gentry – a doctoral candidate trained in biology mechanical engineering, and Ashley Micks, a Stanford student, the team is working with $100,000 that was granted to them last year to prove their concept by October of this year.

Bioprinting holds vast potential. It is already being used to create human tissue, and may soon be used to create matter in the form of non-living biomaterials as well, such as wood or bone.

The team is working on a technique that could allow things such as spacesuits, and even the body, to be repaired with 3D printed cells. With this type of technology, the 3D printer could one-day be the one-stop place for all kinds of replacement parts.

“By printing 3D arrays of cells engineered to secrete the necessary materials, the abundant in situ resources of atmosphere and regolith become organic, inorganic, or organic-inorganic composite materials,” states Lynn Rothschild. “Such materials include novel, biologically derived materials not previously possible to fabricate.”

While their goal seems like something out of a sci-fi book, the team has worked countless hours to prove their dream, and to make this vision for the future a reality.

The technology works by printing cell clusters in a gel solution that contains chemical signaling and support. This gel solution is printed out of a piezoelectric print head which produces groups of cells that can make and then excrete the desired biomaterials in a 3D pattern.

3D cellular printing is ideal for medical applications, allowing for better treatments and customized treatment solutions. The work that Rothchild and the team are doing, though, shows that 3D printing biomaterials has a range of applications besides the field of medicine.