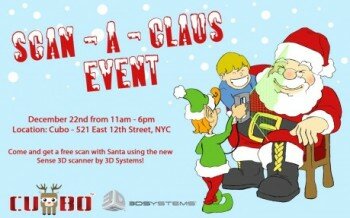 The holidays are here and 3D printing is making its mark this holiday season.  3D Systems’ Cubify division has claimed its place in holiday 3D printing history by offering what they call a Scan-A-Clause.  They say this will revolutionize taking a picture with Santa Clause like we all remember from our childhood.

The event, held for just one day in New York City, allowed kids to sit with Santa and pose just like always.  The big difference was that instead of a camera, the elves take a 3D scan of you with Santa using the company’s new “sense” handheld scanner. Once you’ve been scanned and the scan has been rendered, you can get a 3D printed version of your picture with Santa.

The event was held at Cubo 3D printing and toy store in New York City.  People had to register for open time slots to get their visit to Santa scanned, a process that took about five minutes.

It’s too early to tell how well this event did but this could be a sign of a new way to memorialize your holiday experience.  Keep an eye out for the Scan-A-Clause event next year and get a 3D model of your trip to see Santa instead of a simple picture.