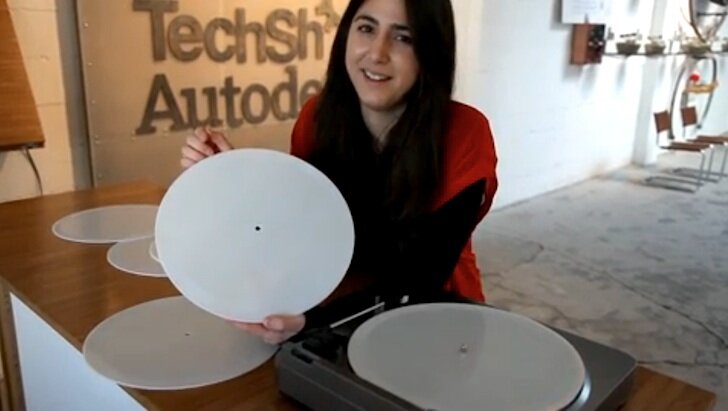 Amanda Ghassaei and her 3D printed record collection, printed on an Objet printer..

Despite the audiocassette, CD, mp3, iTunes, and all the mess we hear about piracy, the vinyl record remains. Many say they prefer the analog sound while others are drawn to the aesthetics of a tangible copy of their most adored songs. And there’s something to be said of the specific tactile experience that comes from operating a record player. The workings of the needle and the grooves are simple enough to relate to — I can say, “There! There is the music. In the grooves.” So when people begin printing records it can hardly be called a comeback as records never left, but as computers have helped bring the music studio to the living room, the 3D printer may bring “record presses.”

As soon as something that even resembled a record could be printed, it was, though it didn’t function. The custom Fisher Price record functions, but I mean c’mon, you can only get down so hard to chimes. Well the new record for quality and functionality of a printed record goes to Amanda Ghassaei, who created an Instructable on how to get digital music files to recognizably play out of a normal record player off of a printed record. Audiophiles will not be impressed; where mp3s play at 16 bits, these records play at around 5 to 6, so don’t plan the 3D printed record party just yet. The songs are a bit foggy and pushed back, generally lacking a lot on the highs, and there’s an ever-present sound of whiny plastic. Of the seven song snippets here, Daft Punk sounds the cleanest and Radiohead sounds the most normal, even with the plasticy wah-wahs.

Now watch her story (sorry for the small size — click Full Screen button to enlarge it).

While not yet to cassette quality, printed records are coming along quickly. In fact, in other of her videos the whine is removed (or less present) and the levels are improved, so expect 7 to 8 bits of sound soon. Amanda used an Objet Connex500, which creates very high-resolution objects with a UV-cured resin, so do not expect to print these records on your MakerBot very soon. Perhaps on the MakerBot Replicator 3 or 4.

Cameron, Senior Staff Writer, is a technology enthusiast that can better write about 3D printing than he can ride a bike. His interest in 3D printing is mostly driven by his desire to become a cyborg. He enjoys philosophical conversation and is also fond of poetry and Star Trek. Connect with him on Google+. View all posts by Cameron Naramore »
« Thing of the Week: Thingiverse Collections
Printing characters and creatures from famous movies »