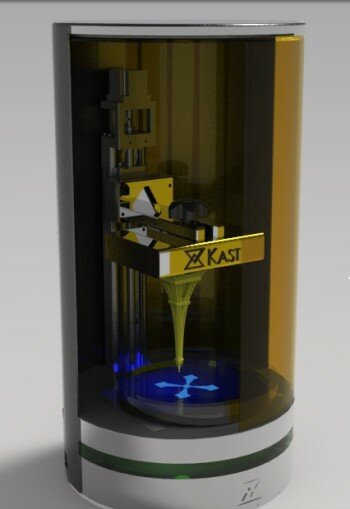 A new, ultra-fast printer is set to enter the 3D printing marketplace.

Introducing KAST -a 3D printer that is able to print 12 times faster than an ordinary 3D desktop printer.

The KAST team has spent two years creating the machine, and is set to launch KAST on Kickstarter soon.

KAST is being dubbed the next generation 3D printer, and is said to be precise, ultra-fast, big, and cheap. What more could you want from a 3D printer?

The KAST team debuted the printer at the HAXLR8R conference in San Francisco, where they seemed to have made a major impression with the machine.

In order to speed up the process of printing, KAST prints with UV-sensitive liquid resin designed to melt when temperatures reach 400 degrees Celsius (approx. 750 degrees Fahrenheit).

While KAST hasn’t officially launched yet, it is set to be on Kickstarter relatively soon, although there is no official launch date yet. The KAST is set to be priced at around $3000, but early birds who pledge for the machine will be able to get it for under $2000.

For those interested in a rapid 3D printing machine, it might be worth it to keep your eyes open for the KAST Kickstarter launch.