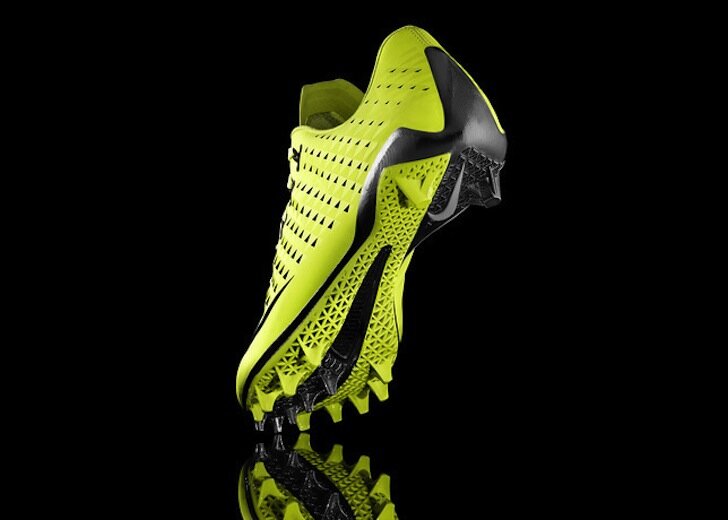 It’s nothing new that shoe companies such a Nike, Reebok, Converse and Addias have been using 3D printers to create prototypes of new model footwear prior to going to the factory line. Weeks are shaved off each iteration and the money saved on human model makers pays for the printers.

But what is new, what is revolutionary, is that Nike has decided to go beyond just prototyping, and has moved into using 3D printing as part of the manufacturing process itself. While they are not printing the entire shoe, and it’s just with one model so far, it is a huge step towards replacing conventional manufacturing methods with additive manufacturing technology.

The new Nike Vapor Laser Talon, from Nike Football, will incorporate a 3D printed plate that weighs just 5.6 oz., lightweight, strong and with a specific geometry to help football players reduce their 40 yard sprint time, by helping them maintain their drive stance longer during what is called the “Zero Step.” The Zero Step is the critical moment before the athlete’s first step is taken, that determines his propulsion and acceleration. As gold medal sprinter Michael Johnson, who works with Nike, said of the Zero Step, “Translated to the game of football, mastering the Zero Step can mean the difference between a defensive lineman sacking the quarterback or getting blocked.”

So why 3D print the plates? Shane Kohatsu, Director of Nike Footwear Innovation, says “SLS technology has revolutionized the way we design cleat plates – even beyond football – and gives Nike the ability to create solutions that were not possible within the constraints of traditional manufacturing processes.” That’s part of the magic of 3D printing: printing the impossible.

SLS is a type of 3D printing process and stands for Selective Laser Sintering. As with all 3D printing technologies, it prints layer by layer to build up a model in three dimensions. SLS does so with a laser that beams itself into a bed of powder and at each spot the laser is pointed, it “sinters” (melts) the powder into a solid.

No word on whose 3D printer Nike is using for this, but if it’s SLS it’s likely a 3D Systems printer. And also no word on the material it’s printing. Website NikeInc.com says it’s a “proprietary material selection.” And I see on Shapeways’ reporting of this, they ending their story with “there are so many sporting applications where a complex, customized product can be 3D printed in Nylon which is incredibly lightweight yet strong enough to withstand great stress if designed properly.” So, perhaps the material is nylon or some derivative of it.

Football players are getting faster and bigger all the time. I think maybe it’s time someone starts 3D printing super strong, lightweight, custom-fitted helmets now to help guard against these speeding 300 pound bodies from killing each other. 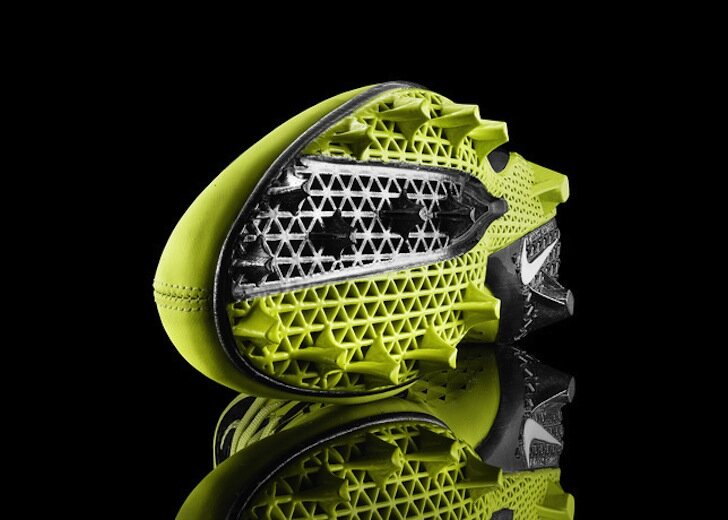