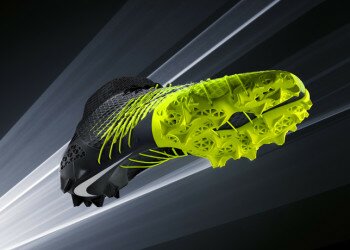 Nike announced this week that it has created a new 3D printed football cleat that is built to enable maximum speed.

Once again, Nike worked with Michael Johnson, long-time partner and gold medal sprinter, and his trainers at Michael Johnson Performance to create this cleat. This gave Nike better insight into what athletes need for lateral agility in the shuttle drill. Johnson had worked with Nike on the previous cleat design.

“Just like a race car driver needs confidence in his breaks, an athlete clocking speed in the shuttle needs the same confidence to stop and change direction,” said Michael Johnson. “If he can minimize the amount of time it takes to decelerate and change directions, he will unleash his athletic ability and accelerate faster into the turn or cut.”