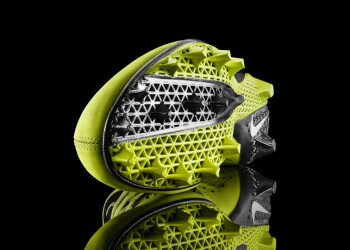 Just in time for the Super Bowl. Nike has introduced a new 3D printed shoe that is designed for speed and multi-directional movement.

In 2013, Nike released the first-ever 3D printed cleat to be worn by football players: the Nike Vapor Laser Talon. At the time, that was considered the fastest shoe ever designed. This year, however, Nike hopes to top that. This 2014 Elite Cleat utilizes the “V-Plate” shape from the Nike Vapor Laser Talon, which has now been adapted for quick multi-directional movement. This allows for speed and the ability to make precise moves – both important qualities in the Super Bowl, as well as for athletes in general.

Other features of this cleat include a full-length carbon fiber plate for enhanced energy-return and a lightweight, one-piece upper to give the cleat a second skin fit. This design also focuses on what Nike calls the zero step; the initial push off the ground before the first step is taken.

With its newest 3D shoe now unveiled, Nike begins to explain the development process. What normally would take three years to produce – is now being printed with ease, thanks to 3D printing. This technology also allows the shoe to weigh in at only a fraction of what it normally would.

These shoes were designed using a manufacturing technique that puts high-powered lasers to the test. They were created using 3D printed shapes, which were specifically designed to allow athletes to be faster.

Nike says this would not have been possible without 3D printing, adding that it may have otherwise taken years to get it just right.

The shoes are expected to make their first debut in Super Bowl XLVIII.

The silver Nike Vapor Carbon 2014 Elite Cleat is available for pre-order on Nike.com, and will be available in a variety of colors this fall.