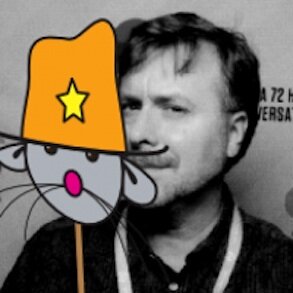 Finland’s Nokia recently received a huge amount of press in the 3D Printing space. The Mobile Phone giant was the first large corporation to embrace 3D printing by releasing templates, specs, recommendations and best practices to 3D Print cases for their popular Lumia 820 phone. The 3D-printing Development Kit, 3DK for short, was an immediate hit.

Now that the media frenzy has died down, I caught up with Nokia Developer Ambassador Randall Arnold to get some reactions from the maker enthusiast who helped hatch the idea for the 3DK project. Randy has been working in product design and development for many years, and had experience with stereolithography – one of the technologies used in some 3D printers – in the late 1980’s.

Randy recalls that 3DK all started with a simple Tweet that generated 40 or 50 re-Tweets, so “I immediately saw the enthusiastic response from the community. John Kneeland, a Nokia Community and Developer Marketing Manager based in Silicon Valley, also noticed the response, and ran with it.” The idea came at a time when 3D printing was just starting to become viable, and Nokia made it easy for makers to print their own case.

Randy thinks back on his early experience with stereolithography and says, “I found out the hard way how really immature the technology was back then. To think forward to where we are today, is just amazing! And what’s important about the Nokia 3DK project, is that we’re pushing today’s 3D Printing technology toward the mainstream.”

“The beauty of the 3DK,” says Randy “is that you don’t have to reverse engineer the case. As designers, we’re always better off with nominal root dimensions, so we don’t run the risk of incorrect tolerances.” While he’s a fan of 3D printing and all it can do, Randy is a realist and clearly understands its limitations. “We’re still in the early stages of practical applications for 3D printing. The general public has no idea about the complexities of 3D printing – from design for manufacturing to post-processing requirements to material selection!”

What Nokia has done, which is important to 3D Printing becoming mainstream, is to make it easy for anyone to 3D Print a case for the Lumia 820. While the company would not allow publication of highest-level engineering files, the mechanical drawings are sufficient to quickly and easily create a new case. Some people are just making replacement cases, but then others are more creative and personalizing their phone.

It’s this group of 3D printing enthusiasts that are pushing Nokia in a direction that was not predicted. Randy notes that 3D printing is “Not quite ready for prime time but we’re getting feedback from these innovators that can be used in our own product evolution. And by this crowdsourcing of product design we are sure we’ll make 3D-printing more accessible to the mass market.” 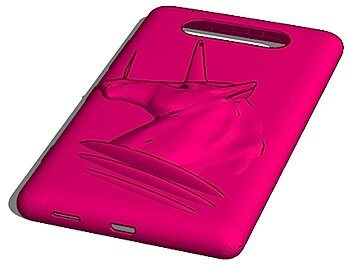 Designer Pekka on TinkerCAD’s website has created phones with unicorn and pirate images.

Growing out of the Finnish culture of collaboration, Randy is seeing unprecedented openness in the American community through 3DK. “Fred Patton from Nokia created a Wiki with best practices, where people are sharing all kinds of findings. It’s especially gratifying to see the service providers like Shapeways and i.materialise also participating. MakerBot has even posted a version that works with their new machine. That’s a big step in this country which tends to be more competitive.”

Of course there is also value in getting to a place where anyone can make a conventional cover as there’s promise for use of 3D printing in replacement parts.
Randy admits it will be 2 – 3 years until that’s really practical, but he believes it’s Nokia’s experimentation that will drive the application.

To many it may seem 3DK is just for a small group of 3D printing fans or is about a large corporation jumping on a hot topic for PR’s sake. But to Nokia, utilizing the kit to crowdsource future product design and to drive market development of 3D-printing applications may be strategic to the future of the company.