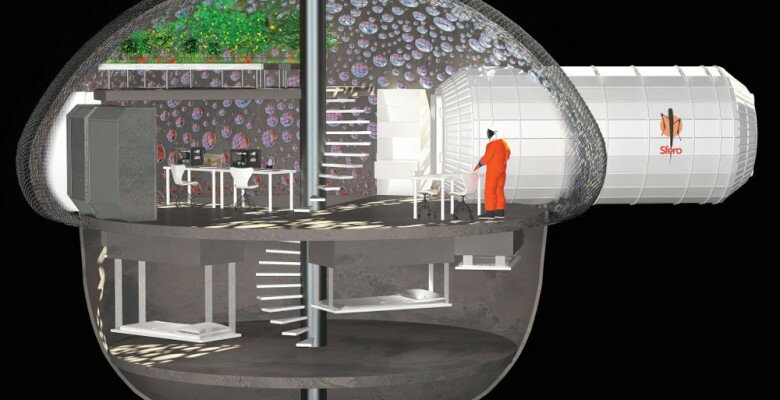 Fabulous, a French 3D printing firm, has brought together a team of scientists to develop a 3D printed dwelling that could be used to colonize Mars.

The design uses plentiful iron oxide found on the red planet as the raw materials for the 3D printed structure.

It also mines permafrost to create a layer of water that would be housed between two shells and be used to keep out radiation from the dwelling.

According to Dezeen, the structure would also be self-sustaining.

“The house would start off as a central drilling rod that burrows several metres into the planet’s soil to extend two robotic arms, which would harvest materials to be used for 3D-printing the habitat’s internal and external dome-shaped shells,” Dezeen reported. “The spherical shape has been designed to offer high resistance to Mars’ low atmospheric density.”

Fabulous founder Arnault Coulet envisions the whole thing as a womb of sorts where the water layer could be a “permanent psychological reminder of the main element of the mother planet – water constituting a sort of protective amniotic fluid for humans.”

Of course, the structure is all just theoretical for now, still Coulet is proud of his team’s achievement.

“We still decided to show the French expertise in 3D printing, space travel, and architecture, presenting a standout record,” he said about his Mars dwelling design.