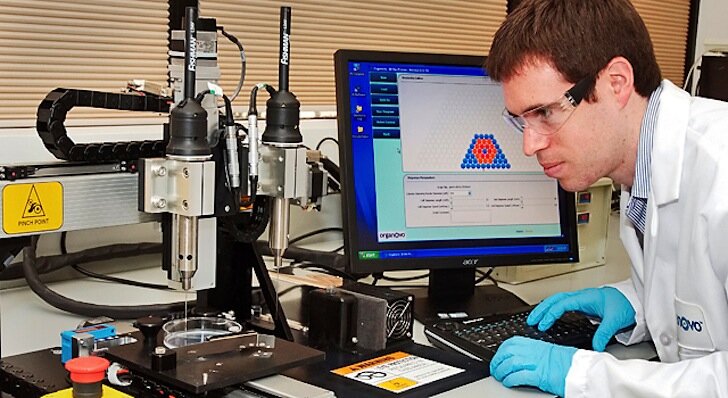 3D printers are printing just about everything these days, including human tissue and the occasional bladder. And if you’ve followed our articles here at 3Dprinter.net, you know we’ve spoken often of a small San Diego company named Organovo that is already 3D printing human tissue for medical research and is working towards printing entire organs.

You’re not yet able to print any useful, living models of biological matter on your home printer, or even any commercial printer from Stratasys or 3D Systems. It will take a special 3D printer like Organovo’s NovoGen MMX Bioprinter. That’s the hardware, but what about the software? Can you go over to Tinkercad or load up any CAD program to design a heart or liver? No, designing biomatter requires special software. Special software that not only they, but others in the burgeoning field of bioprinting will need someday. The designers of human organs are not likely to be the same people who design industrial prototypes, so Organovo realized that new software, designed for the biomatter scientists of the future, would not only be beneficial to them, but also be a commercially viable product.

And CAD software giant Autodesk thought so too.

The two companies, the tiny Organovo and the mighty Autodesk, are now working together to create the bioprinting design software of the future. No details on the financial deal, and there is no timeline for release of the software, but Autodesk’s 14-member Bio/Nano Programmable Matter Group is now working with Organovo to create this exciting new design software.

Carlos Olguin, head of Autodesk’s Bio/Nano Programmable Matter Group, says of the project, “In a sense, it’s like a little startup inside of a much larger company.”

3D printing human tissue is not just an extension of an FDM 3D printing method; it doesn’t just squirt out cells and hope they stick together in the right shape. To best describe it I’ll quote the great description of the process that futurist Chris Barnett wrote in our first article on Organovo:

The company cultures cells from a potential patient, extrudes them into a very thin “bioink sausage”, and then uses a special cutter to chop them up into tiny pieces that form into bioink spheriods containing up to 80,000 cells. The Novogen MMX’s print head next places these spheroids into a “biopaper” hydrogel to form the first layer of an object, such as a blood vessel. Another layer of supportive biopaper and bioink spheroids is then added, and then another. Once the object has been full printed the biopaper support material slowly dissolves away. More remarkably, the bioink spheroids fuse together into living tissue, with the cells contained in their aggregate rearranging themselves. For example, when printing a blood vessel, the endothelial cells migrate to the inside, the smooth muscle cells move to the middle, and the fibroblasts migrate to the outside.

Outside of the medical benefits we’ll see sometime in the future, investors might want to pay attention to this new joint venture now. Organovo is a publicly traded company, under the symbol ONVO. It’s public knowledge that I own, and have traded Organovo shares. And, in full disclosure, this morning I bought more at the market open. While this deal with Autodesk does nothing to bring in revenues for now, and we don’t know how it will all turn out in the end, it does add another layer of security about investing in the company. With two dollar stocks, one must be very careful. They often come and go. I don’t know the stats exactly, but I bet they go more than they come. So, your entire investment needs to be viewed as “at risk.” But with each new partnership (such as those they currently have with pharmaceutical companies) comes more of a foundation for the company, and the Autodesk deal is one more partnership that adds to my faith in Organovo’s future.

I warned readers yesterday on the dangers of investing in microcap 3D printer companies. The market cap of Organovo is only a bit more than that of Arcam AB, the company that was the subject of the aforementioned article. But Organovo has liquidity. That is, a large number of shares trade daily — over 300,000. Compare that with the mostly zero traded share days of Arcam AB, that is, zero until a Seeking Alpha article brought it to the attention of investors and traders early this month. Even with the hype, it still only averaged a daily volume under 10,000 shares of it’s two million share float a day this month. Low liquidity means one would potentially have a tough time selling on bad news, which could mean plunging share prices you cannot control. This is not the case with Organovo and it’s 31 million share float (still small, but not tiny).

But enough about investing, sorry, I always seem to veer off in that direction when I talk about public 3D printer companies. What’s more important is the future that the venture between Organovo and Autodesk portends for science and health. It may seem like science fiction, but if the world manages to not blow itself up, we’ll absolutely be printing replacement parts for humans in the future. And I think it will be sooner rather than later.