There’s a little problem with the dream of someday 3D printing almost anything you want, whenever you want. And that is, intellectual property law. Ethically, you should not just duplicate the result of someone else’s hard work, unless they allow it. Legally, you are not allowed to do it. But physically, putting ethical and legal reasons aside, you will be able to print whatever you want (within technical limitations of course) with your own 3D printer.

Well, you can now. But maybe not in the future.

Just as the music industry cracked down on online digital music theft, you can assume that patent and copyright holders will do what they can to stem the same upcoming issue with 3D printers. But how? How can a 3D printer know that the instructions in the CAD file will produce something that is protected under Intellectual Property Rights (IPR)? Here’s how: 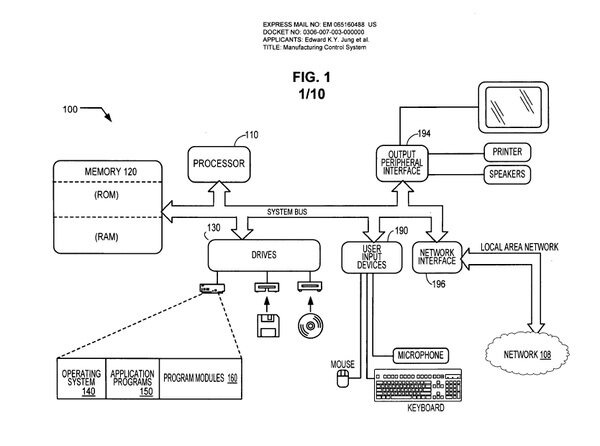 Nathan Myhrvold–who many call a “patent troll,” with the 40,000 or so patents his company Intellectual Ventures and its subsidiaries controls–has an idea, and he’s just been granted patent #8,286,236 for his protection method by the United States Patent and Trademark Office. The patent, filed back in 2008, is titled a “Manufacturing control system” and it describes methods for managing “object production rights” (do I hear a new acronym OPR?). It works like Digital Rights Management system (DRM) does with digital music, movies and books–it you don’t have the license for it, you’re not going to be able to avail yourself of the goods. Similarly, if a 3D printer utilized this or a similar method, you will not be able to print your 3D object.

MIT’s Technology Review, in their article on this, has some quotes from Michael Weinberg, a staff lawyer at the nonprofit Public Knowledge, and author of It Will Be Awesome if They Don’t Screw It Up, a 2010 white paper on how intellectual-property rights could harm the development of 3-D printing. He describes the patent this way:

“You load a file into your printer, then your printer checks to make sure it has the rights to make the object, to make it out of what material, how many times, and so on,” says Michael Weinberg, a staff lawyer at the nonprofit Public Knowledge, who reviewed the patent at the request ofTechnology Review. “It’s a very broad patent.”

“This is an attempt to assert ownership over DRM for 3-D printing. It’s ‘Let’s use DRM to stop unauthorized copying of things.’ Nothing says manufacturers have to use DRM.”

That’s true, nothing does say the manufacturers have to use DRM (or OPR?). And I think at the home/hobby 3D printer end, printer makers seem to be too free-spirited a bunch of innovators to want to go along with something like this. But, the higher end printer makers may be more apt to participate, given their relationships with so many companies who are holders of IPR. Then there is the potential bad press associated with any illegality by customers with their printers (look how Stratasys seized a 3D printer leased to someone wanting to print a gun) that they would want to stay ahead of.

Weinberg went on to say that the patent is not simply related to 3D printing, but to other areas of manufacturing, such as using digital files in “extrusion, ejection, stamping, die casting, printing, painting, and tattooing and with materials that include “skin, textiles, edible substances, paper, and silicon printing.”

That is one broad patent, something the USPTO seems to specialize in lately.

I want to end with the best quote I’ve read on this subject today. Cory Dotorow at BoingBoing drew this hilarious conclusion:

But at least it’s patented by a notorious patent troll, which means that other jackasses who try to implement this stupid idea will find themselves tied up in absurd, wasteful lawsuits. It’s mutually assured dipshits.

I’m interested in what readers think about this patent. You can read the gory details here. Let me know in the comments below.

Mark is the founder of 3DPrinter.net. He encourages anyone reading this to submit their own article for publication. Connect with him on his Google+ account. View all posts by Mark Fleming »
« Printed Stainless Steel in HD
Tinkercad introduces their Shape Scripts API »