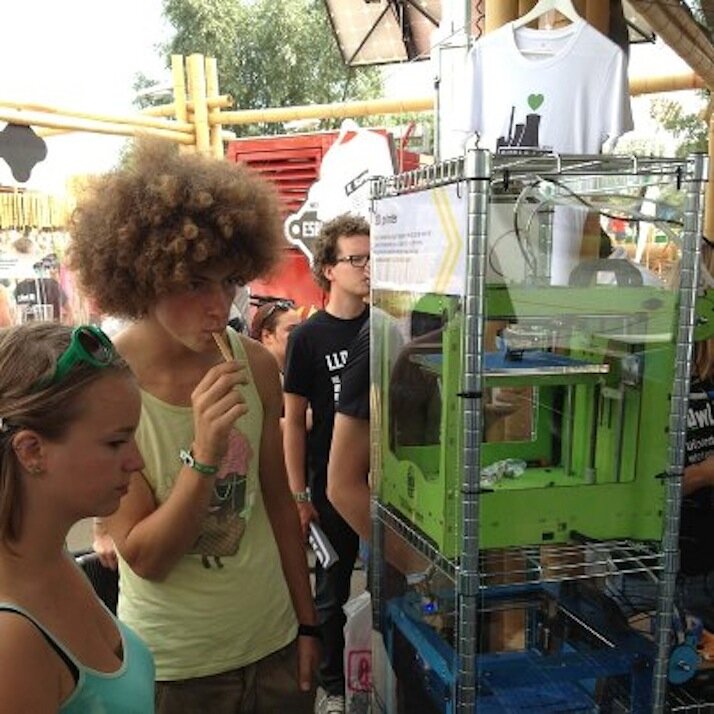 We know that 3d printing is about as green a manufacturing technology as you can hope for, wasting no material in the process, using only what it needs to produce the part. And, we’ve seen plenty of recycled plastics and other materials repurposed as raw material for a 3D printer.

Now they’re doing something in The Netherlands on this subject that’s both informative and fun–they are recycling and then 3D printing something–one after the other, on the spot.

It happened last week at the Lowlands 2012 event, where representatives from the Perpetual Plastic Project were there with two Ultimaker 3D printers, and were creating 3D printed objects from disposable cups.

Since the goal of the project is not just to let people know about 3D printing, but to spread awareness of the concept of recycling itself, they created a transparent installation so people could watch the process. And, they let visitors perform the entire process themselves, from washing their old cup to printing the object.

I don’t speak Dutch and odds are you don’t either. But even without understanding what they are saying in the video, they are still speaking the international language of innovation, so you are sure to enjoy it, regardless.

Mark is the founder of 3DPrinter.net. He encourages anyone reading this to submit their own article for publication. Connect with him on his Google+ account. View all posts by Mark Fleming »
« 3D Systems unleashes Cubify Invent 3D design program
Beautiful Eventorbot: A new open-source 3D printer »