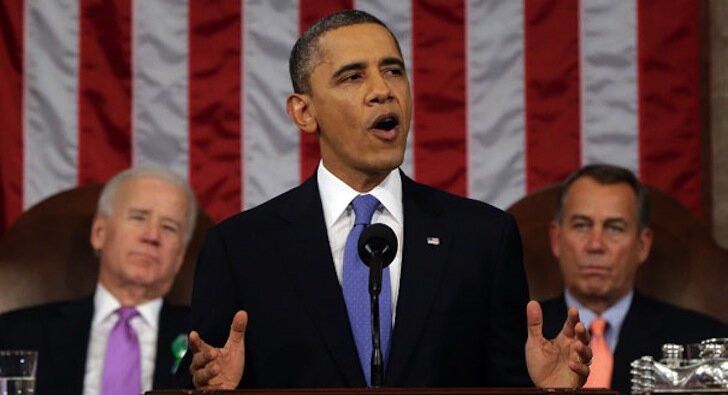 Unlike at his inauguration, President Obama spent some time on the U.S. economy in his State of the Union Address last night. As he was talking about ways to create new American jobs, out came the words “3D printing.” It was a fine moment of retribution for us believers who have had to listen to all the cynics that have been telling us that 3D printing is just for hobbyists that want to print little plastic doohickeys. Take that! Of course, we always knew better.

Here’s an excerpt of the relevant part of the speech:

“Our first priority is making America a magnet for new jobs and manufacturing. After shedding jobs for more than 10 years, our manufacturers have added about 500,000 jobs over the past three. Caterpillar is bringing jobs back from Japan. Ford is bringing jobs back from Mexico. After locating plants in other countries like China, Intel is opening its most advanced plant right here at home. And this year, Apple will start making Macs in America again.

“There are things we can do, right now, to accelerate this trend. Last year, we created our first manufacturing innovation institute in Youngstown, Ohio. A once-shuttered warehouse is now a state-of-the art lab where new workers are mastering the 3D printing that has the potential to revolutionize the way we make almost everything. There’s no reason this can’t happen in other towns. So tonight, I’m announcing the launch of three more of these manufacturing hubs, where businesses will partner with the Departments of Defense and Energy to turn regions left behind by globalization into global centers of high-tech jobs. And I ask this Congress to help create a network of fifteen of these hubs and guarantee that the next revolution in manufacturing is Made in America.”

Judging from the look I see on confused faces from people to whom I mention 3D printing, I imagined millions of Americans last night mouthing, what the heck is 3D printing? And I’m sure their second question was, what’s going on in Youngstown, Ohio of all places? And, interestingly, checking our website analytics, I saw that most of the search queries bringing traffic to the site after the address were variations of “3d printer in youngstown.” People obviously were paying attention.

Youngstown serves as a pilot proof-of-concept to President Obama’s $1 billion plan to build 15 such manufacturing innovation hubs across the country. The project is a public-private partnership, so its funding will be coming from several directions, including a consortium of private teams from Pennsylvania, Ohio, and West Virginia which will match $40 million the Department of Defense’s initial $30 million contribution. On the private side, a collaboration of universities, community colleges, and workforce developers will provide knowledge-based resources and financial and human capital. From the public side, along with the Department of Defense, financial support will come from the Departments of Energy and Commerce, the National Science Foundation, and NASA.

The project must proceed full steam ahead. Other countries aren’t standing idly by while we make plans to make more American goods in America. In fact, just this week I read an article where China is investing $80 million in their own research investment center. And I’m certain their hackers are scouring our computers for whatever technology they can steal.

But even if all developed countries make their own 3D printers, it won’t help them stem the tide of American consumers starting to purchase from American manufacturers who 3D print for their own regional customers. Why purchase a product from China and ship it to the U.S. when it can be printed right here in the U.S. for about the same price (cheap labor no longer applies) at a lower shipping cost? The time is soon coming when it’s game over China’s trade advantage over the U.S.