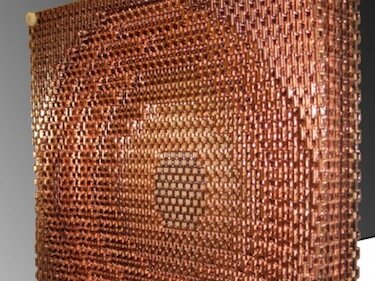 Do you know what refraction is? I thought you did but there’s a chap in the back looking confused — it’s a surface phenomenon where the direction of a wave changes due to a change in its medium. It’s why a straw looks crooked in a glass of water and why spearfishing has a steep learning curve (aim low). Also rainbows. Pretty cool stuff, but negative refraction, now this is some comic book mess. It’s basically what it sounds like: instead of the waves’ direction shifting slightly, the waves are sent in reverse of what naturally happens. I say naturally since no natural material exhibits this property; negative refraction is only possible through metamaterials, artificial materials that have special effects on light and/or sound not due to their compositions, but because of their very specific structures. You know what’s good with very specific structures? Yup, 3D printing. I know, that was a gimme.

Isaac Ehrenberg is a graduate student of mechanical engineering at MIT and he’s one of the authors of the paper recently published in the Journal of Applied Physics concerning a 3D printed metamaterial lens that exhibits negative refraction on radio waves. The lens is concave and made of over 4,000 tiny “unit cells” that one of the other authors, Bae-Ian Wu from the Air Force Research Laboratory, helped to create for an earlier refraction project; the lens was coated with copper to make it conductive. When tested, the super-light lens (<1lb) allowed almost all radio waves to pass through, which is good, and the waves were focused into a rather tight point, also good as that’s the point of the lens. This metamaterial is quite simple to produce so other researchers can study these peculiar phenomena at low costs, and the lens can focus waves as effectively as much larger and more expensive lenses. So what can be seen through a metamaterial lens? Oh, nanostructures, distant celestial bodies, nothing. That’s right, nothing. A form of invisibility has already been achieved with metamaterials and 3D printing has made making them way more practical. Practical invisibility, eh? Yes, it will be a mischievous day indeed the day personal cloaks land on Thingiverse.