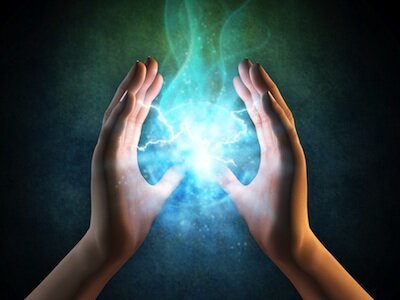 I bet it’s been a long time since you’ve met someone like me.  You’re thinking, “Hey, they don’t really do door-to-door anymore, do they? Door-to-door salespeople went the way of kids selling newspaper subscriptions to pay for college and girl scouts unloading Samoas and Thin Mints,” that’s what you’re thinking.  Well, the reason I’ve shown up in person to make you this offer is, well, because it really is a once in a lifetime thing, ya see.  The sorta thing you’ve got to see in person.  I mean, really, you’ve got to see it to believe it.

I’m only offering it to a select group of people that I think are really on the cutting edge, you know.  People who are ready to start living in the future.  They’re sick of everything up until this point, asking, “When the heck is Star Trek going to get here? Where is my replicator already?”

Well, friend, if you’ll listen for just a minute, I’ll tell you where your replicator is: it’s right here. In my suitcase. “In your suitcase?” That’s right, friend.  This handy dandy little machine is your replicator.  Heck!  It’s more than a replicator! Let’s just say it’s from the future.  We call it a 3D Atom Printer. Takes atoms, stacks ‘em up, spins ‘em around, and spits out anything – and I mean anything – you ever dreamed of instantaneously.  Breaks down the compounds of the air and rearranges them to your heart’s content!

You’re used to 3D printers, sure.  That 21st Century device that used to print out plastic 3D models.  You’d upload a 3D image into your software and it’d lay down layer upon layer of hot molten plastic until you had yourself a cute, pink copy of the Venus di Milo.  Used mostly for toys and trinkets, right?

Wrong, I’m sorry to say.  Those bad boys could lay out a handy-dandy little prototype for any budding, young scientist or engineer just waiting to make his or her or zir career.  You know the story: before they released a new Barbie doll or a new auto part, some company would print out a prototype to make sure it looked alright, worked alright, and would sell alright.  It was for aficionados, experts, a small minority of the population developing products in labs.  But, as the technology got better, the computers smarter, the lasers sharper, and the people much more clever, these 3D printers became cheaper to make, which made it cheaper to buy.  And people, do-it-yourselfers in niche 3D printing communities on the Internet, people called “Makers” started, well, making.  They started building their own printers cheaper and cheaper.  Finally, they made that one printer that would change the face of the technology: the RepRap.  The RepRap, see, was the 3D printer that was meant to be able to replicate itself.  That is, it was meant to print all of the parts necessary to construct a duplicate of itself.  ‘Course, you had to put the thing together, but it would print out its own parts as you built it.

What about my 3D Atom Printer? How’d we get from there to here?

Well, the RepRap – that was just the beginning, you remember.  People started to really cling to that idea of a 3D printer.  They said, hey this little sucker sure is good for a thing or two.  You need a replacement part, some little, missing piece for your broken bicycle or your half-built IKEA Freudenreuder futon?  Just go to the IKEA site, download the 3D model, and print it out! You need a custom designed athletic shoe? Maybe something for your flat feet? Design it online and print it out! Or, say, are you building a highly complex piece of machinery, maybe relies on miniscule grooves and lattices and what have you? Something so detailed that a big metal injection mold just can’t cut it? Well, use this 3D printer to print it out.  Additive manufacturing it’s called.  Layer by detailed layer laid down so you’ve got a specific object all in one solid piece.  And it’s cheap as heck because you don’t have to make that metal mold first, just for your highly specific, one-off piece of production.  Just one thing? Why make a whole mold for it?

Sure, sure, sure, that 3D design software was tough to use, CAD software normally reserved for architects, engineers, and video game designers.  But when Tinkercad came out, that online 3D modelling program so simple a kid could teach grandpa to use it, regular folks like us really got the hang of it.  Put a cube here and put a pyramid on top, you’ve got yourself a little house.  And, heck, when Autodesk came out with that camera app where you could take a 360 degree shot of any object and it would turn it into a 3D model, you could copy just about anything.  Wasn’t long before the public started to get ahold of this stuff.

Couple people had ‘em in their homes.  You know, go on that iTunes store – the MakerBot Thingiverse or the Cubify Store – click on the 3D model you want, and for less than a penny you had yourself a set of legos or an iPhone case.  ‘Course, there was a lot of copyright law to get around and figure out, what with all of the Star Wars fans making their own models of Boba Fett for their “kids”.

And there were also those big Kinkos style stores and vending machines.  Bring in your 3D model file and print out whatever you need.  Wasn’t too practical at first, but once they got the print time down to a matter of minutes, it was more convenient to go down to the MakerShop or print in your home than it was to order something from Amazon – even with Amazon’s same day delivery.  A lot more gratifying, too.

You’re asking, “Okay, so what’s the deal with the 3D Atom Printer?” Cool your horses, Sir or Madam, I’m getting to that!

See, once people figured out that you could use it with all sorts of materials, that’s when the craze really took off.  I mean, people were printing intricate pieces of wooden furniture, metal bicycles, and, heck, even their own medications.  Once the FDA approved Big Pharma’s online formula registration program, you could download two aspirin every time you got a headache.  The system wouldn’t let you take more than your daily allotment and medicine got so cheap that the drug companies had no excuse but to make the pill formulas accessible to all.  Soon we had people in Bangalore, India downloading pills.  People in places as remote as Palacios, Bolivia getting TB medicine.  Go down to those 3D printing shops in the center of town and you could print out whatever you wanted, even a prosthetic leg if you needed one.  Need a new lung? You can have that, too, and you don’t have to worry about your own immune system fighting that organ because, what’s the number one thing about using those 3D printers? Everything you print is tailored to you, even to your own antibodies.

Housing became a cinch because they were printing houses out of concrete complete with wiring and plumbing and insulation in just 20 hours with those giant printers that Berok Khoshnevis was talking about.  Printing highways, airplanes, and spaceships in a matter of days.  Half the time, people couldprint using recycled materials, which really helped reverse global warming.

Okay, well, 3D printers? Those were last decade.  Those were last century!  No, that was a million years ago! This is the real deal replicator.  Heck! It’s more than a replicator! Takes atoms, stacks ‘em up, spins ‘em around, and spits out anything – and I mean anything – you ever dreamed of instantaneously.  Breaks down the compounds of the air and rearranges them to your heart’s content!

Sir or Madam, I’m as serious as a scorpion bite.  Anything you ever dreamed of printed right here. Want that perfect boyfriend, girlfriend, gilled friend? Print it right out! Take your old shirt and make it brand new! Take your skin and make it bright green! Every wish or desire fulfilled right here and right now with my 3D Atom Printer!

You’re asking, “But what are the drawbacks to a 3D Atom Printer?” None that I can think of, Sir or Madam.  What could be the drawbacks of controlling all time and space? Name me one!

Okay, I can see, judging from the look on your face that you’re still a bit concerned.  Well, of course, people are going to abuse this sorta thing.  Print a gun and use it.  Print some drugs and use ‘em.  Rearrange the dust particles in your apartment to make an atomic bomb and use it! They’re gonna hack the government regulations or the regulators are going to abuse their power, but that’s not so different from yesteryear is it?

So, what do you say? Are you happy sticking to printing in plastic, wood, metal, and muscle with your traditional 3D printer? Or do you want to be the first in your dimension to own a 3D Atom Printer? The first to break down the compounds of the air and rearrange them to your heart’s content?

What? Wait just a minute here! You say you’ve never used a 3D printer before? Never even printed with muscle tissue before? What year is this exactly?

Holy cow! Practically the Stone Age! I must have set that dial wrong! You people are probably still stuck on little, pink models of the Venus di Milo! Medieval type like yourself, you’re not ready for my 3D Atom Printer, rearranging the air right before your eyes to make your wildest dreams come true! You haven’t even ended poverty, world hunger, war yet! Shoulda known from all that body hair.  I’ll just be going now.  Set the thing for 2042.  Those people won’t know what hit ‘em!

What’s that? Oh no, no! I couldn’t sell this to you, my friend!  You’ll just have to wait.

How long? About ten years before those printers will be everywhere, I’d say, if I know my history.  Maybe another ten before the fun stuff really starts.  And, not too long after that, these atom printers will be so ubiquitous, you’d have to shuffle the atoms of the 4th dimension and travel back in time just to sell one!

Yep, I’d say you’re right on the edge.  That stuff is just starting to happen. Look it up! 3D printers. You’ll see! What’s that word you people use? That’s right. “Bing” it to see what I’m talking about.

Now, if you’ll excuse me, there’s a world of people in 2042 that are just itching for my little device and the elimination of all time and space.  Wait ‘til they get a load of this sucker!

Michael Molitch-Hou is founder and CEO of The Reality™ Institute, a service institute dedicated to determining what's real and what's not so that you don't have to. He is firm advocate of world peace, and lives with his wonderful fiancé, Danielle, in San Pedro, CA.
View all posts by Michael Molitch-Hou →