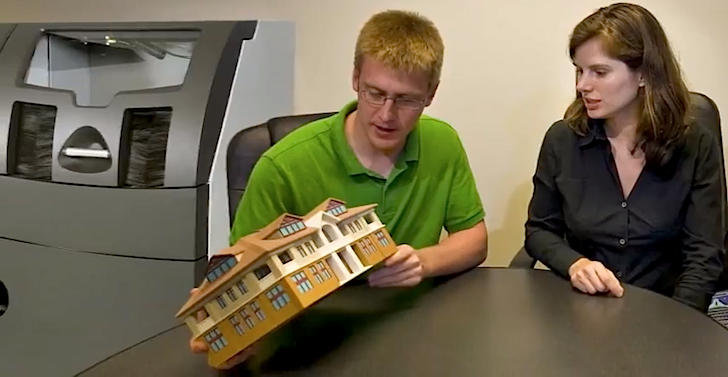 If you watched TV and movies before the ‘60s then you’re familiar with black and white filming. I remember watching syndicated episodes of The Andy Griffith Show and how it always felt like another world. The Wizard of Oz, too — the land over the rainbow was such a relief from the dreary greys of Kansas. One of the more recent films that highlighted the contrast between B&W and color was Pleasantville, and Warren Epstein had this to say about the film: “People – and their surroundings – change from black-and-white to color when they connect with the essence of who they really are.”

With 3D printing, much of what’s produced professionally is white, and black is one of the most popular filaments with home printers. But could Epstein’s observation apply here? 3D Systems says yes with the announcement of the ProJet x60 series, and I agree.

An object that’s designed to be in color will not be fully understood or appreciated until it’s in color. If you’re prototyping a new surfboard that has superior wave-catching features, your investors may be put off by a cream colored piece of plastic. If you present a deep blue craft, though, with the fins in refreshing greens and hints of seafoam, they’ll know what you’re there for. Color is very impactful; lots of smart researchers have done countless studies on how color affects our emotions and memory.

The people at 3D Systems understand the importance of color, which is why they acquired ZCorp some time ago. ZPrinters stand out with their full-color abilities, so it’s on their platform that the x60 series was built. “These exciting, next generation color printers embody 3D Systems’ commitment to democratize access to powerful and affordable 3D printing solutions for professionals, educators and consumers, alike,” said Michele Marchesan, Vice President and General Manager, Personal and Professional Printers for 3D Systems. The x60 series can produce 90% of the colors in Adobe Photoshop, which is a lot. These machines also operate very quickly, so objects are had same day instead of next week.

If you want your prints to be all that they can be, they should be in compelling full color. Though they’re advertised as affordable, you still have to ask for a quote for an x60, which means that I can’t afford it. We may have super affordable full-color 3D printing in our homes sooner than you could get a ProJet installed though.