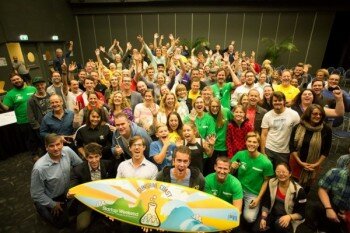 A team of Queensland students have won the first ever “Start Up Weekend” in Australia with their 3D printed virtual reality headset for smartphones.

The 3D printed headset known as the “VR SmartView” is a head-mounted display case that uses the smartphone to completely immerse its viewer in the movie at hand. It’s ideal for long trips on the road or plane – and allows passengers to enjoy their game or movie in complete surround 3D.

The VR SmartView is compatible with multiple leading smartphone brands such as Apple, Samsung, Nokia, and HTC. The VR Smartview is a “virtual reality headset like no other,” according to the company website. “The VR SmartView is lightweight, comfortable and completely immersive. Just clip in your smartphone, plug in your headphones and take off to another world.”

Over 140 people gathered at the event on Friday, where 17 startups and more than 40 people pitched their ideas in 54 hours to a panel of 4 judges. The VR SmartView was declared the winner of the event and the student team that designed it took home over $15,000 in prizes.

The judges said the VR SmartView prototype had the most commercial potential. They were also impressed by the fact that the team had secured $450 in sales and had obtained a potential multi-million dollar distribution deal during the weekend.