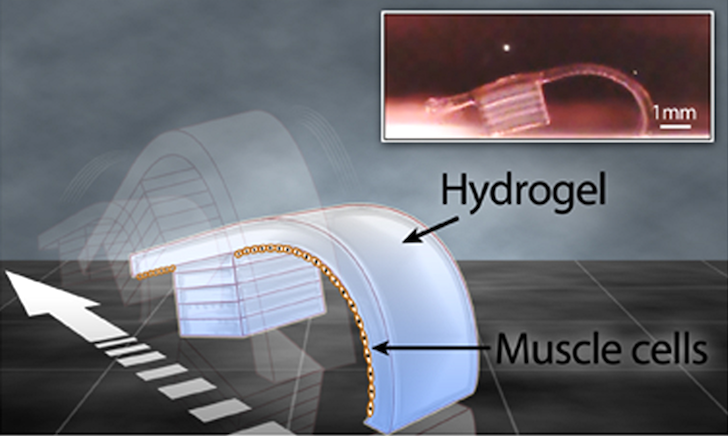 There’s some small news in the robotics world, and I don’t mean insignificant. I mean tiny. While large robots are useful in manufacturing and health services, the more miniscule machines have great potential in medicine and sensor applications. Building miniature robots is more difficult though, as technologies that allow manipulation of microscopic materials are only just being developed. Due to how cumbersome working with micromaterials currently is, some researchers have been trying to make use of the mechanics that nature imparts upon life; cells and bacteria carry out specific functions and locomotion in microscopic form factors, so building upon (or simply exploiting) their success seems only logical. A University of Illinois Abel Bliss Professor of Engineering (and Electrical and Computer Engineering and Bioengineering), Rashid Bashir, is leading a team that’s using 3D printing to further enable that pursuit.

By printing a small 7-millimeter flexible leg-like structure out of biocompatible hydrogel, the U of I researchers were able to coat it with cardiac cells from rats and achieve locomotion; because heart cells synchronize their beats with those that are in close proximity, that beat sends a pulse throughout the leg that creeps it along much like an inchworm. As is typical with 3D printing, it was easy to change the configuration of the little bio-bot to maximize its traveling speed, so some versions slowly pull themselves forward while others execute ollie-like maneuvers.

In their current form these munchkin movers offer little more than nerd entertainment, but of course this is a forward-looking project. Now that it’s understood how to make living tissue work with printed materials, efforts are shifting towards adding function beyond motion. By adding cells that react to certain stimuli it’s possible for this tech to serve as a broad form of biosensor; the presence of toxins and drugs could be detected in blood and even acted upon by future bio-bots. For now though the team’s attention is on increasing mobility and adding light-sensitivity.

Drug delivery is a critical link in the pharmacological therapy chain, and in certain illnesses like cancer it’s one of the more frustrating hurdles. These technologies present new possible modes of getting medicines where they need to go, and later forms may even repair gene malfunctions in real time. I expect the organic machines will continue to shrink, but slightly bigger ones may make good pets.

Source: University of Illinois
Photo by Elise A. Corbin

Cameron, Senior Staff Writer, is a technology enthusiast that can better write about 3D printing than he can ride a bike. His interest in 3D printing is mostly driven by his desire to become a cyborg. He enjoys philosophical conversation and is also fond of poetry and Star Trek. Connect with him on Google+. View all posts by Cameron Naramore »
« Self-Sculpting Down to the Bone
It’s not that hard to put a ship in a bottle (with a 3D printer) »