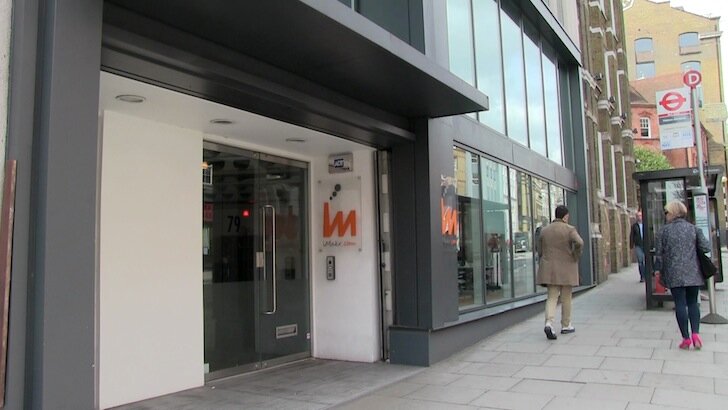 Be sure to check out Christopher Barnatt’s new book, 3D Printing: The Next Industrial Revolution.

For personal fabrication to enter the mainstream, 3D printers need to become standard consumer appliances that can be purchased in physical stores in everyday locations. Over the past few months, this has also started to happen. Not least, in November 2012 MakerBot Industries opened the first physical 3D printer store in New York, while earlier this month Staples began to stock Cube 3D printers from 3D Systems in some of its physical outlets.

A similar watershed event was the opening of the iMakr store in London on 30th April 2013. iMakr is the first physical 3D printer store in the United Kingdom, and claims to be the largest such store in the world. Intrigued, I decided to pay iMakr a visit to see just what is on offer. The video report of my visit is below:

iMakr is located in Farringdon in the heart of the city, and — unlike Staples and the MakerBot store — sells 3D printers from a wide range of manufacturers. These include the Cube and CubeX Trio from 3D Systems, the Up! Plus and Up! Mini from PP3DP, the MakerBot Replicator 2, Solidoodles, the iRapid Compact, and the Leapfrog Dual Extruder Creatr. To step into the store from a main London street and to see all of these 3D printers on display and on sale really was quite astonishing. It is one thing to believe that a 3D Printing Revolution is on the cards, but another entirely for it to be physically manifested before your eyes.

iMakr’s founder and director is Sylvain Preumont, who told me that the ‘time is now right’ for 3D printing to be brought to the general public. As he put it, thirty years ago 3D printing was purely an industrial technology. Ten years later it started to become accessible to enthusiasts and geeks, and ‘nowadays it is for everybody’. Sylvain’s intention in founding iMakr is subsequently to provide a wide opportunity for people ‘to engage with 3D printing technology’, and in particular to ‘see the printers printing’ and to touch 3D printouts.

In addition to 3D printers and filament, iMakr sells 3D scanners and a range of 3D printed objects. Some of the latter items are designed and created in-store, while others are from well-known 3D printing artists like Bathsheba Grossman. iMakr also provides a print-on-demand (POD) service, and can scan visitors to turn them into a 3D printed model of themselves. Two training courses are also on offer, each lasting a couple of hours and costing £49 (about $75). The first course is for complete beginners who can arrive with no knowledge and leave the store with a printout of their first design. The second course alternatively helps those with existing CAD skills to best apply their screen-based 3D design knowledge to 3D printing.

As the range of products and services on offer serves to demonstrate, iMakr is not just a 3D printer store, but a focal point for 3D printing’s development as a mainstream consumer technology. As Sylvain put it, his intention is to empower people to ‘think in 3D and design in 3D’, and to capture the public’s imagination by turning 3D printing into a tangible, everyday activity.

Right now, for most people, 3D printing is still a distant and magical technology that they only ever experience second-hand on television or via the web. To change this will undoubtedly require more physical 3D printer stores, and more pioneers like Sylvain Preumont. On the day I visited iMakr, three 3D printers (a Cube, an Up! and a Solidoodle) were quietly fabricating things in the window, and I saw more than one passer-by walk past, double-take, and return for a closer look. Few people are likely to forget the first time they see a 3D printer in action, or the first 3D printed object that they hold in their hand. And, in addition to selling printers, it is this kind of mind-changing experience that iMakr is all about.