Despite there being several sites dedicated to the emergence of 3D printing (like this one) publishing hundreds of articles written by clearly in-the-know geniuses (like this one), there are still people trying to convince others that 3D printing is no big deal, and that it’s all just hype. Not only are those people in denial, but they’re doing a great disservice to all of humanity by inadvertently, and perhaps sometimes intentionally, stifling innovation; some people actually listen to the naysayers, and so those people won’t go out and make something new because they’ve been convinced that businesses and the state of manufacturing are still operating like they did in the ‘80s. If you’re one of those people, here’s your wake-up call: Paul Brody, Vice President and Global Industry Leader of Electronics at IBM, in his keynote presentation at the Siemens Global Innovation Summit, pointed to an undeniably relevant observation: “Thingiverse, the most popular online design sharing community, is seeing an exponential increase in the number of items being shared.” 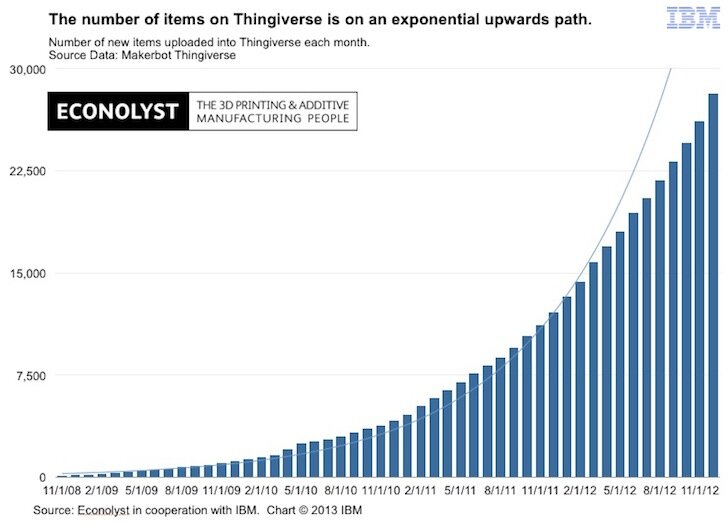 That sentence may not sound very impactful to you, but that could mean that you don’t fully understand what “exponential” really means. Yes, it’s mathematical, but it carries far-reaching implications. As Ray Kurzweil eloquently explains in his Law of Accelerating Returns, “An analysis of the history of technology shows that technological change is exponential, contrary to the common-sense “intuitive linear” view.” This holds true for the Ford Model T, which saw exponential sales growth after the implementation of the assembly line, the personal computer as it relates to cost, size, power, and sales, and now it applies to 3D printing too. 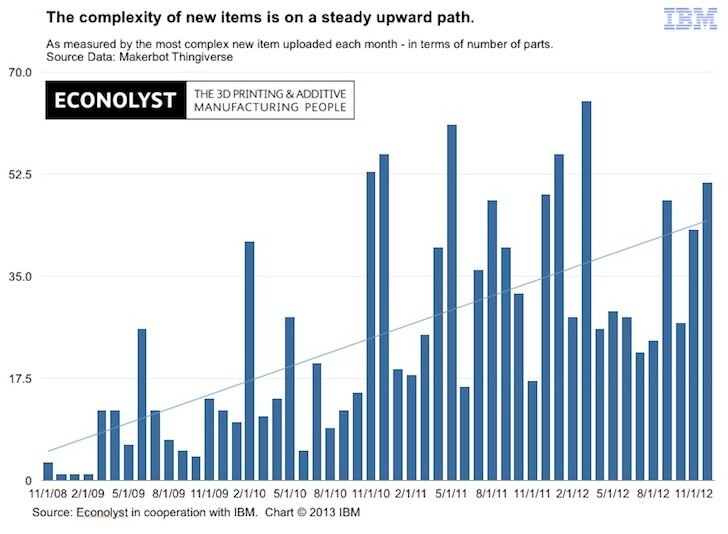 The rise of digital fabrication is not just due to 3D printing, though, as better software is also further enabling creativity to flow from minds to reality. This is evidenced by the fact that the complexity of the objects uploaded to Thingiverse is also steadily increasing, with more moving parts and more intricate geometries. Brody states in his slide presentation that the assembly time of a Model T dropped from 14 hours to 1.5 hours after Ford put his employees on the assembly line format. Intuitive 3D modeling programs are doing the same for engineers and inventors of today, allowing them to digitally create their ideas before they become overwhelmed by the design phase. In Ford’s day, going from custom parts to standard modules greatly increased efficiency, but today, digital fabrication is allowing a reversal of that trend; 3D printing unique parts is no more expensive than printing standard parts, so customization is now becoming standard.

Brody further explains that there are three forces playing together that are bringing about the advent of digital fabrication: 3D printing, intelligent robotics, and open source electronics. He also pointed to the social element of it all, where Facebook and Kickstarter bring new reach capabilities for great ideas. All of these factors mean greater innovation, more products, and therefore more competition. There are so many great designs now that people are becoming more and more concerned with functionality, meaning new creations have to actually work better than current models or bring something new to the table. So what really stood out to me was this succinct statement that “Product design is now product marketing.”