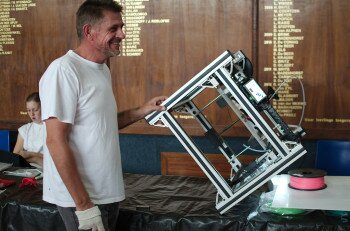 Up until now, 3D printers, while great creations, have been touchy and finicky machines. The slightest movement would displace the print head. A slight knock could cause a 3D printer to become inoperable, requiring professional adjustments.

This is no longer the case! Introducing the RoboBeast; a 3D printer that was designed to change all that. The RoboBeast is durable, really durable; it’s practically bulletproof. Not only can it be moved during the printing process -it can even print in an upside down position. It was designed to be tossed into a vehicle to be hauled off to remote locations and put straight to work – without requiring fiddling around to get things ‘just right’.

The story of this printer runs deeper than just simply an invention. The inventor behind this creation is a man named Richard van As, a South African carpenter who shot to fame after his story went viral almost a year ago.

Van As is the co-creator and inspiration behind the idea of the RoboHand – a robotic prosthetic hand that has helped amputees and those who are born without digits, in situations where traditional prosthetics are generally not an option.

Van As’ story itself is an inspiration on overcoming countless odds. In a catastrophic wood-working accident, van As tragically lost four of his fingers. Traditional prosthetics, and their exorbitant prices, were not an option for him. Van As, though, refused to give up, and after persistence and resolution, he located US inventor Ivan Owen. Van As, along with Owen worked via Skype and together created the RoboHand, and placed the blueprints for the hand online, open source for anyone to use. Anyone with access to an open source Rep-Rap style 3D printer, that is.

The RoboHand grew in popularity, with one notable project known as “Project Daniel” taking the RoboHand and 3D printers to amputees in war-torn Sudan.

Due to the growing popularity and increasing demand for RoboHand, van As said that there was a clear need for a less-finicky 3D printer; one that could be carted to remote locations, and used to create prosthetics. After Project Daniel, the need for a reliable 3D printer became even more obvious.

Which is where the RoboBeast comes in. Van As enlisted help from House4Hack, an initiative that brings together technology specialists and entrepreneurs. In just two and a half months, a prototype of the RoboBeast was built, and van As says that more RoboBeasts are currently being built.

RoboBeast is perfectly suited for printing RoboHand prosthetics, and with its durable construction, it’s strong enough to be taken, well, just about anywhere.

The first big test for the RoboBeast will be when van As takes it somewhere it’s sorely needed. Where this is, however, isn’t known –van As won’t say. But we’ll keep you updated on the progress of this amazing machine as soon as we find out!