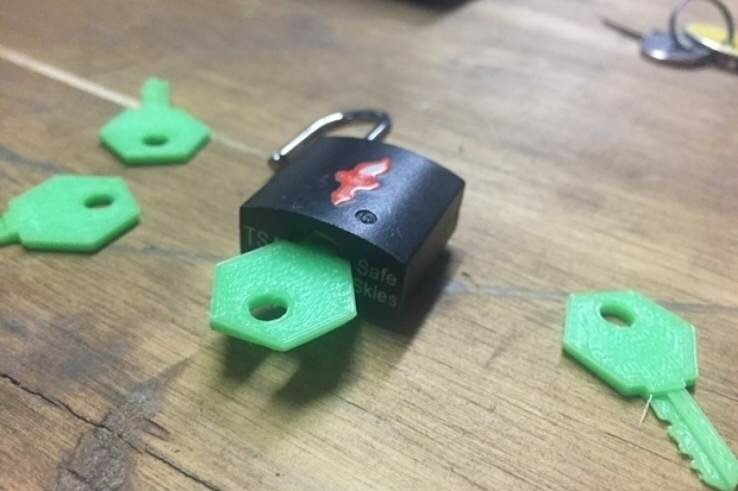 3D printing isn’t often considered when it comes to security, but that will now change after security experts managed to use 3D printing to clone all seven TSA master keys used for their screener friendly locks.

The TSA, as you’ll remember, offers a set of screener-friendly locks. These locks use one of seven master keys that only the TSA can use — until 2014. In an article in The Washington Post, a reporter included a shot of all seven keys on a desk. It wasn’t long before nearly all the keys were made available for 3D printing and, last week, security researchers released the final key.

At last week’s HOPE Conference in New York, hackers calling themselves DarkSim905, Johnny Xmas, and Nite 0wl explained how — and why — they cracked the TSA keys.

“This was done by legally procuring actual locks, comparing the inner workings, and finding the common denominator. It’s a great metaphor for how weak encryption mechanisms are broken — gather enough data, find the pattern, then just ‘math’ out a universal key (or set of keys),” said Johnny Xmas. “What we’re doing here is literally cracking physical encryption, and I fear that metaphor isn’t going to be properly delivered to the public.”

The keys, should you be interested, are here and can be printed on a 3D printer.

The TSA, for their part, doesn’t care, telling The Intercept that “The reported ability to create keys for TSA-approved suitcase locks from a digital image does not create a threat to aviation security. These consumer products are ‘peace of mind’ devices, not part of TSA’s aviation security regime.”

In other words, you might as well not use locks at all.