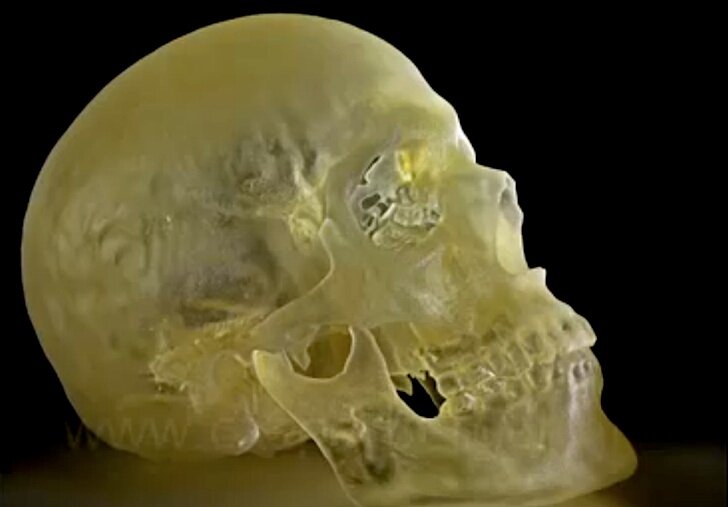 When you do a self-portrait you probably reference a mirror or pictures of yourself and delicately stroke paint to canvas or sketch charcoal on some textured paper. Oh, you don’t do self-portraits? Neither do I. Not since fourth grade anyway. But what about self-sculpture? Historically, these are not as common, as means of seeing oneself in three dimensions have only recently come about through video cameras and 3D scanners. Dutch artist Caspar Berger does self-sculptures and for his recent project he went the extra mile to ensure that what he captured goes beyond skin deep.

Having done several self-portraits Caspar has much experience with the technical limitations of seeing and transposing oneself. His last self-portrait focused on skin and its acting as a barrier between the outer and inner selves — what is perceived and what really is. This presented a new perspective for Caspar where the self may consist of more than what can be seen; if the nonvisible of you isn’t presented in some way, are you truly represented? So he wanted to go beneath the skin, and in his own words:

“Where my last portrait was about flexible skin, I have now turned to what supports the body: the skeleton. I see the skeleton as the basis of the physical body, but also as the carrier of our ‘eternal identity’, which long after we are gone continues to reveal who we were.”

Caspar underwent a CT scan to procure an accurate digital 3D model of his skeletal structure; he took that model and printed it. The project Skeleton captures Caspar’s likeness in bony precision. You can see some of it on his Facebook page, where it appears he had one of his femur cast in gold.

As is, this is an intriguing artistic endeavor, but I can’t help but hope that there will be a Skeleton 2.0 that not only captures the shape of Caspar’s bones, but also their makeup, perhaps employing a similar technique as the Protohouse. I do wonder though if he’s at all embarrassed with his ‘eternal identity’ on display for everyone to gawk at.

Cameron, Senior Staff Writer, is a technology enthusiast that can better write about 3D printing than he can ride a bike. His interest in 3D printing is mostly driven by his desire to become a cyborg. He enjoys philosophical conversation and is also fond of poetry and Star Trek. Connect with him on Google+. View all posts by Cameron Naramore »
« 3D Printing Urban Repair, Gorilla Style
Rat-heart powered bio-bots for print »

One Response to “Self-Sculpting Down to the Bone”