When it comes to making bold moves Shapeways kicks down doors to the future of 3D manufacturing. Since the good people at Shapeways always wanted their own factory, they decided to build one. This Factory of the Future is planned to be some 25,000 square feet of sheer make. Shapeways is based in New York City so it follows that they plant the redwood of innovation on Long Island. The Factory is intended to serve as a catalyst to spur cutting-edge creativity from the diverse and outgoing NYC culture. 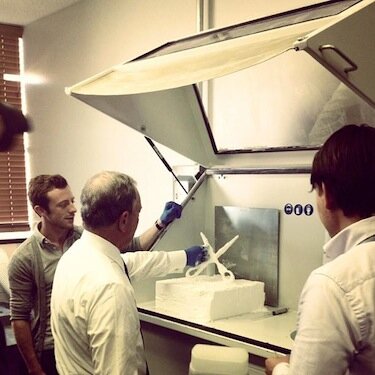 Mayor Bloomberg used these 3D-printed scissors to cut the ribbon at Shapeways’ new 25,000-square-ft factory of the future, which will be the world’s biggest 3D printing facility for individual consumers.

Kegan Fisher, Shapeways’ Director of Industrial Engineering, states that 30 to 50 industrial-sized printers will hold the building down and keep it from floating into the awesomesphere. Selective Laser Sintering and UV Acrylic Resin Printing certainly aren’t small-time technologies either. By my calculations, even with a steep wholesale discount, that’s over $10 million worth of makey machinery to work (play) with. And I’m pretty sure that the 50 or so designers, printer specialists, and engineers will want to be paid too. They’re important people; they’ll be working diligently to bring us new materials and cheaper prints. Yes, Shapeways has somehow convinced their CFO to be actively concerned about lowering the prices of their already affordable services. By their theory, if people can more easily afford to produce their creations then they’ll create more things worth producing. It sounds crazy I know, but Shapeways is running with it, and quite gracefully considering the weight of their wallet.

Mayor Bloomberg was at the ribbon cutting ceremony of the forward-looking Factory to show his support of an initiative that could have very distinct benefits for his city. It’s estimated that 3 to 5 million objects will be produced annually by the Factory. That’s several million things that were not being produced in the city before now. That’s several million additional counts of some unit measuring economic prosperity. Talk about in-sourcing. Imagine the savings on shipping costs. Shapeways wants their Factory of the Future to be a buzzing hive of efficient and customizable manufacturing for every size of business and person. If you’ve prototyping needs, they’ll do that. If you have a short run of personalized gifts, they’ve got you covered. The same applies to projects of considerable quantities. Whatever you need made they want to make it for you.

Beyond producing solid goods though, the Factory will also be a center of research and development. I will not at all be surprised to see entirely new printers and methods of fabrication come from this. The need and potential for novel ways of delivering customers’ complex orders are great and I’m sure the brilliance of the Shapeways crew is biting at the bit, anxious to meet the sometimes surely ridiculous requests of eccentric and demanding clients. With all the people of NYC I’m confident some will press the bounds of the Factory’s capabilities. Good news for us because Shapeways’ engineers will have to come up with ways to move the 3D printing frontier forward just to keep up.