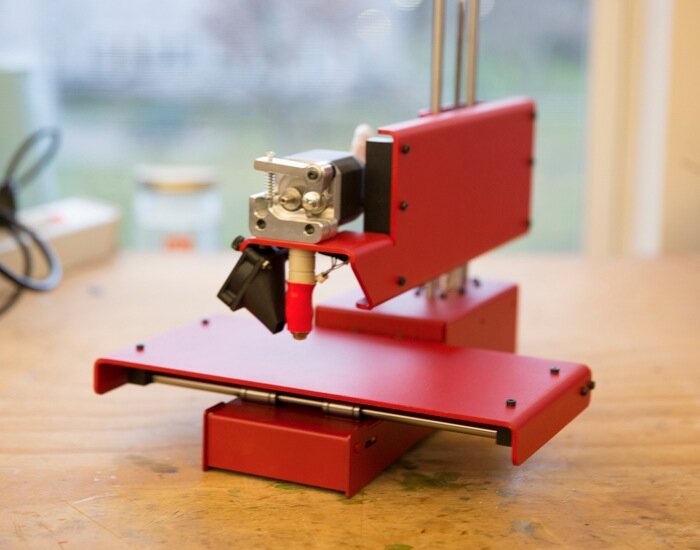 Printrbot, which was founded two years ago after a successful run on Kickstarter, creates open source and budget friendly 3D printing machines.

Printrbot is showing off its new printer during the 3D print show in New York, which runs this week from February 12-15.

Printrbot’s older model, the wood-framed Simple, could only print up to 4”x4”x4”, and was known to be a little on the noisy side.

The sharp looking red, metal framed Simple is quiet in comparison to the older, wooden model and is also capable of printing larger objects, up to 6”x6”x6”. This model also features a Z-axis end stop adjustment knob and self-leveling print bed. The new Simple is designed for accuracy in printing objects.

The metal Simple is well designed, and is by far the most refined Printrbot to date. It operates smoothly, and prints well. In terms of quality and print speed, the metal Simple outperforms the wooden Simple, and according to the MAKE website, the metal Simple handles like a professional-grade machine.

While there hasn’t been any official pricing information released yet, the metal Simple is estimated to fall somewhere s between the wooden Simple’s price of $399 and the Printrbot Junior, which is $699.

The Printrbot all-metal 3D printer will be available for pre-order soon, through Printrbot and Makershed.

For more information on any of Printrbot’s machines, head over to Printrbot’s website and have a look.