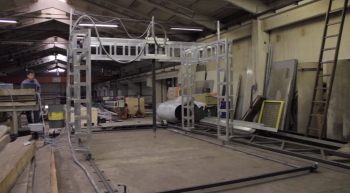 Houses constructed by 3D printers may be closer than we think.

The printers, known as the P1, P2, and P3, each stand 2 meters tall, but can print objects much higher than that.

The BetAbram team says that each of the printers has been constructed, but they are still working on developing software for the P2 and P1 printers. The team says they have already printed a lot of smaller object like sculptures, and even miniature houses, but not any full-sized houses just yet.

This news comes on the heels of Chinese company Shanghai WinSun Decoration Design Engineering Co. designing an enormous 3D printer that built ten houses in one day –all out of recycled materials.

And of course, there was news earlier this year of the 3D house printing robot. Professor Behrokh Khoshnevis of Southern California grabbed headlines across the world with news that his 3D printing concrete-ejecting robot could print a house in 24 hours.

While these devices show us just how far 3D printing has come, 3D printing everyday homes isn’t quite here yet. Just like the other 3D house printers, the BetAbram machines could potentially be used to provide emergency houses for natural disasters, or to help provide affordable housing in impoverished countries.