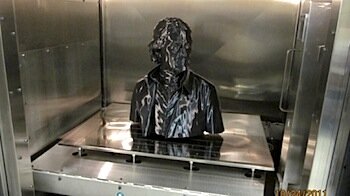 The Smithsonian Institute has a collection of over 137 million priceless historical artifacts. Only two percent of that collection is available for public viewing at any given time and only to the privileged few who can travel to Washington, D.C., to tour the museum. A new initiative by the Institute might change all that. Using 3D digital models and printing technology, the Smithsonian is working on recreating many of its exhibits, models and scientific replicas. Along with the hands-on models, a digital archive of all the treasures stored at the Institute will be created as well.

The first 3D project undertaken was a replica of President Thomas Jefferson. The original statue can be found at the Thomas Jefferson Museum at Monticello in Virginia. The replica, which is described as the largest museum-quality replica ever produced using 3D printing techniques, is on display at the National Museum of African History and Culture. Rather than using the traditional method of making a rubber mold to cast the replica, the Jefferson statue was made by taking a highly detailed digital laser scan of the original and letting a 3D printer do the rest.

The initiative is the brainchild of Adam Metallo and Vince Rossi, 3D digital coordinators for the Smithsonian. Once they had successfully recreated the Jefferson statue, they realized that they could make a digital archive of the museum’s entire collection. Using the same high-end scanner they used on Jefferson, as well as less expensive tools like cloud-based software and digital cameras, the pair has already begun the painstaking work. Their hope is not only to preserve the museum’s priceless collections, but also to make them available to more people. Once replicas are digitized, multiple 3D models can, theoretically, be made, allowing the copies to be displayed in schools and museums across the country. Artifacts that have, up until now, only been viewable by a privileged few will then be available to hundreds of thousands of people every year without the expense of transporting the fragile antiquities or concerns about damaging them.

Right now, the only limitation on the project is the scarcity of resources. 3D printing technology is still quite expensive. While the idea is to eventually digitize the entire collection, for the time being, Metallo and Rossi have to choose their subjects with care. They are focusing on those pieces that have the most relevance to our national story and those which will be the most useful to future researchers.

While the project is still in its infancy, the implications are obvious. Once 3D technology is common place, museums everywhere will be able to protect and share their collections in a whole new way.