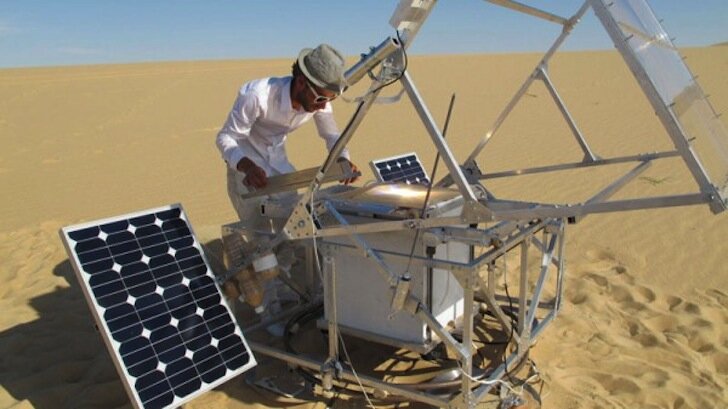 Like most sane people, I’m a fan of sustainability. And like everyone that’s heard of 3D printing, I think it’s awesome. With 3D printing being an additive process, it makes sense that it can further enable a sustainable future. Just because it makes sense to me though, doesn’t mean it’s anything more than speculation. Or is it? Markus Kayser built a 3D printer that’s powered by two of the most abundant resources available to us: the sun and sand.

Kayser first built a Sun Cutter, which is like a laser cutter, if the laser was replaced with concentrated sunlight. He did his testing in the Sahara Desert where there’s plenty of sunshine, but there’s also lots of sand. So it occurred to Kayser to concentrate a bit more sun and create a totally solar powered 3D printer. Like the Sun Cutter, the Solar Sinter’s electronics are powered by photovoltaic panels, but instead of a ball lens, four large fresnel lenses focus the sun’s rays to over 1,600 degrees Centigrade onto a bed of sand, sintering it. The electronics aim the lens and the only human input is pushing a new layer of sand over the just sintered layer, and that could be automated too.

Kayser’s project “demonstrates the exploration of hybrid solutions linking technology and natural energy to show the great opportunities, to question current methodologies in manufacturing and to test new scenarios of production.” Printing houses with clay [https://3dprinter.net/automated-clay-home-construction-with-fabclay] will be rather renewable, but not more than solar powered sand sintering. If this was scaled up, it could print glass houses at no more cost than would be required to build the printer. At that price you could throw all the stones you like.

h/t: This is Colossal