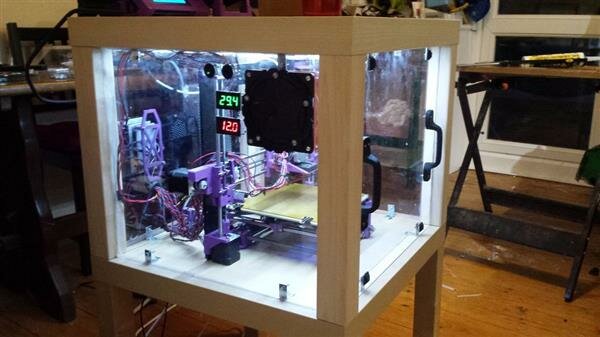 Ingenuity and an empty wallet can be the mother of some great hacks.

Now one maker dubbed ‘phatima’ has figured out how to make a 3D enclosure using IKEA furniture and very little cash that just so happens to solve some common 3D printing woes.

It also starts with two of those $9.99 Lack side tables.

After stacking them and installing some plexiglass, phatima ended up with this:

In addition to looking pretty nifty, phatima explained the enclosure helped solve some common 3D printing problems the IKEA hacker was having before building his IKEA enclosure.

“Having recently acquired a 3d printer, I quickly noticed that, despite calibrations, there were a few temperature-related problems,” phatima explained.

“The chief among them was the amount of time the bed took to heat up, the room was not able to hold the temperature unless the doors were shut and the curtains pulled – this lead to another problem, I was overheating!  We also had problems with layer delamination on larger prints in ABS – something that could be solved by keeping the printer in a warmer environment.”