I’m a Bond fan — not to the point of knowing who played Bond in every movie, but I like spy gadgets, foreign sports cars, and promiscuous women, so I’m a Bond fan. The series is itself iconic, but some of the films are especially memorable. Goldfinger is one of those, and while that’s mostly attributable to Sean Connery’s supreme acting and classic manliness, I think the Aston Martin “most famous car in the world” DB5 left a prominent mark in our collective memory. 282 horsepower of sexy silver beast, 1960s style, is hard to forget. It’s equally hard to tell which helped the other’s sales more: the car or the movie. Regardless, it’s been used in several Bond movies since then, and the most recent is Skyfall. What makes this DB5 different is, you guessed it, it was 3D printed. Though I should say they were printed, as there were three in total. 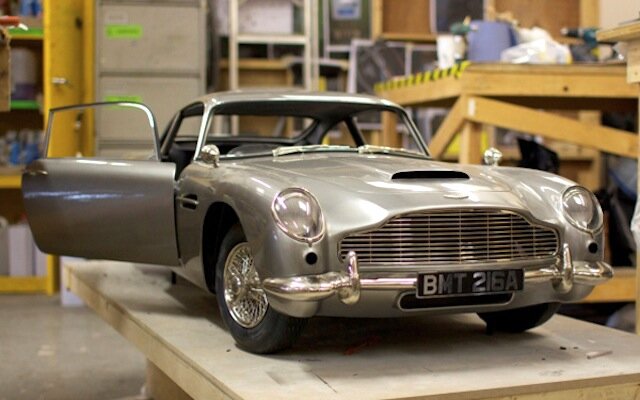 When the minds at the British Propshop Modelmakers Ltd. were looking for new ways to produce their props they found that the German voxeljet met their needs wonderfully. Though the VX4000 printers at voxeljet could have produced the whole 1:3 scale car as a single piece in one print, each car was made of 18 pieces as the Brits wanted realistic functionality. And they got realistic; after Propshop painted them it’s difficult (impossible) to discern that they’re fakes. I watched the movie and I can think of only one scene where I knew that I wasn’t looking at a real car, and that’s only because I had read about this beforehand. As the prop people at Weta Workshop and White Room Artifacts know, it’s generally cheaper and faster to have props printed than to build them by hand, and the results are just as good, but usually way better.

The original Aston Martin DB5 is obviously worth a pretty penny, but since one of these models was auctioned for nearly $100,000, (SPOILER ALERT) it makes the cost of exploding one of the others for the film seem exaggerated (but paid for). But other than lower costs, less time, and higher quality, there may be a future reason to have 3D printing in film studios. The allegations of animal cruelty made against the makers of the upcoming Hobbit movie came with a request for the CGI master Peter Jackson to commit to using no real animals in his films; there’s been no such commitment made so far, but 3D printing will surely be there to help if it ever happens. In the meantime, at least real cars can be spared the brutality of Hollywood.

Cameron, Senior Staff Writer, is a technology enthusiast that can better write about 3D printing than he can ride a bike. His interest in 3D printing is mostly driven by his desire to become a cyborg. He enjoys philosophical conversation and is also fond of poetry and Star Trek. Connect with him on Google+. View all posts by Cameron Naramore »
« Objet and the Scholarly Way
3D printer stocks soar on Wall Street »

One Response to “Spoiler: Bond’s Old Aston Martin is a New 3D Print”