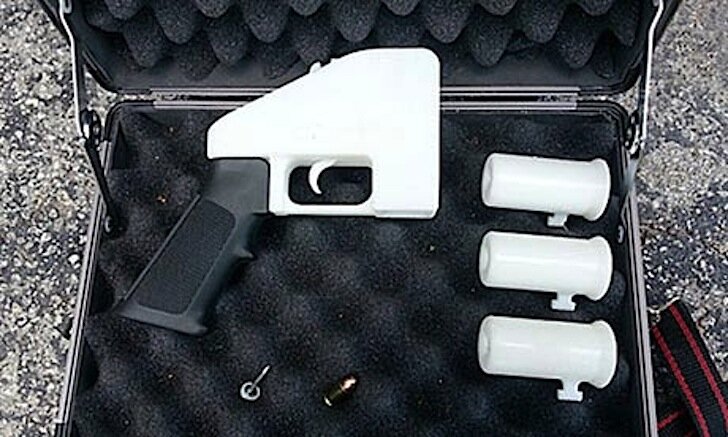 Fifteen of the gun’s 16 pieces can be assembled into a gun.

We all know about Defense Distributed’s, and founder Cody Wilson’s, quest to freely distribute files online that would enable anyone with a 3D printer to print their own gun. You would have to have lived in a cave to not have heard about this, but if you need to catch up read our articles on Cody Wilson, Defense Distributed, and in particular the article on the fully functional gun he successfully printed and fired last week, the Liberator.

But, we all knew what was going to happen next. Our oppressive government, headed by an administration whose ultimate goal is to take away our Second Amendment rights, stepped in yesterday and ordered Defense Distributed to remove the files to the Liberator from their servers.

#DEFCAD has gone dark at the request of the Department of Defense Trade Controls. Take it up with the Secretary of State.

Distributed Defense’ file repository, DEFCAD, now has a red banner appended to the top that reads, “DEFCAD files are being removed from public access at the request of the US Department of Defense Trade Controls. Until further notice, the United States government claims control of the information.”

Wilson told Betabeat, “We got an official letter from the Secretary of State, telling me who they were, what their authority was under U.S. law and telling me they want to review these files to see if they’re class one munitions. That includes blueprints.”

In the letter, embedded below, the State Department says that Defense Distributed may have released data that is controlled by the International Traffic in Arms Regulation without getting prior authorization. This would put the company’s actions in conflict with–oh boy–the Arms Export Control Act.

“Please note that disclosing (including oral or visual disclosure) or transferring technical data to a foreign person, whether in the United States or abroad, is considered an export,” reads the letter. It also says that until Defense Distributed has received the legal all-clear, the company “should treat the above technical data as ITAR-controlled. This means that all such data should be removed from public access immediately.”

Mr. Wilson believes that he is immune to the Department of State’s review procedures as Defense Distributed is a nonprofit and the blueprints are protected under the public domain.

“I immediately complied and I’ve taken down the files,” Mr. Wilson said. “But this is a much bigger deal than guns. It has implications for the freedom of the web.”

As Wilson hints, that doesn’t mean the government has successfully censored the 3D-printable gun. While Defense Distributed says it will take down the gun’s printable file from Defcad.org, its downloads–100,000 in just the first two days the file was online–were actually being served by Mega, the New Zealand-based storage service created by ex-hacker entrepreneur Kim Dotcom, an outspoken U.S. government critic. It’s not clear whether the file will be taken off Mega’s servers, where it may remain available for download. The blueprint for the gun and other Defense Distributed firearm components have also been uploaded several times to the Pirate Bay, the censorship-resistant filesharing site.

Wilson argues that he’s also legally protected. He says Defense Distributed is excluded from the ITAR regulations under an exemption for non-profit public domain releases of technical files designed to create a safe harbor for research and other public interest activities. That exemption, he says, would require Defense Distributed’s files to be stored in a library or sold in a bookstore. Wilson argues that Internet access at a library should qualify under ITAR’s statutes, and says that Defcad’s files have also been made available for sale in an Austin, Texas bookstore that he declined to name in order to protect the bookstore’s owner from scrutiny.

Here’s the actual letter from the US Dept of State:

But files are already loose on the internet, likely in the hands of tens of thousands, maybe hundreds of thousands, of people. And Wilson can’t be the only person designing firearms. Once out of the bag, it cannot be shut down. Not without a government by force against individuals and their personal 3D printers — and that’s the really scary part that will eventually come next.

Be careful what you decide to 3D print. Not all shapes will be allowed.